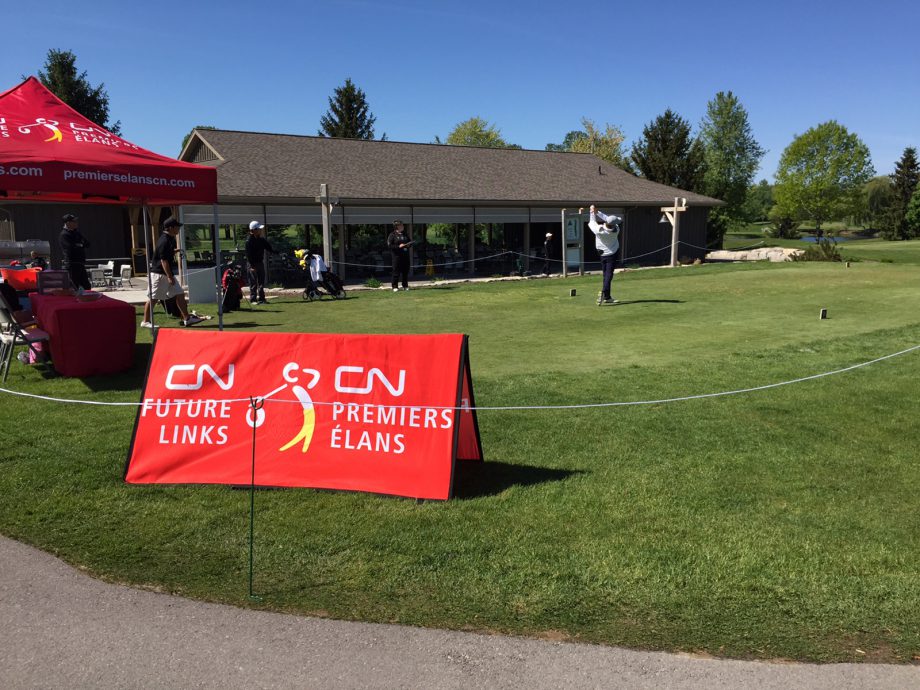 Chilly overnight temperatures delayed starting times this morning at Pine Knot Golf & Country Club for the second round of the CN Future Links Ontario Championship in Dorchester, Ont. Alyssa Getty and Nicholas Brisebois did not let the later start slow their paces as both matched their first round tallies to claim the lead.

Alyssa Getty shot a 3-over-par 74 to climb into first place in the Junior Girls division. The Ruthven, Ont., native took advantage of the par fives today, birdieing both the 2nd and 14th holes. Her identical first and second rounds have her at 6-over par. Opening round leader Selena Costabile remains within striking distance, back by just a single shot. After a tough start on the front nine, the Thornhill Ont., product settled down to shoot even par on the back nine to finish with a round of 78.

With back-to-back rounds of 69, Nicholas Brisebois finds himself in sole possession of the lead in the Junior Boys division. A trio of birdies down the stretch has the Ottawa native at 4-under par for the tournament – two shots clear of L’Île-Perrot, Que., native Sun Kim. Brendan Seys carded an even par round to finish alone in third.

The battle for fourth features seven players, including Tony Gil from Vaughan, Ont., who notched six birdies en route to a 1-under-par 70. He currently sits at even par for the tournament alongside Development Squad teammate Trevor Ranton of Waterloo, Ont. Fellow National Squad member Étienne Papineau from St-Jean-sur-Richelieu, Que., completed the round at even par to move into a share of 22nd place.

From August 3-6, the 2015 Canadian Junior Boys Championship will be hosted by Summerlea Golf & Country Club in Vaudreuil-Dorion, Que. Earning entry into this competition will be the top six finishers in the Junior Boys division of the CN Future Links Ontario Championship.

The 2015 Canadian Junior Girls Championship will be played August 4-7 at Deer Park Municipal Golf Course in Yorkton, Sask., with the top six finishers from the CN Future Links Ontario Championship earning exemptions into the event. In addition, each of the six CN Future Links Champions from this season will receive an exemption into a 2016 Canadian Women’s Tour event.

The final round of the CN Future Links Ontario Championship will begin tomorrow at 7:30 a.m. EDT with the final group on the tee at 12:50 p.m. EDT.