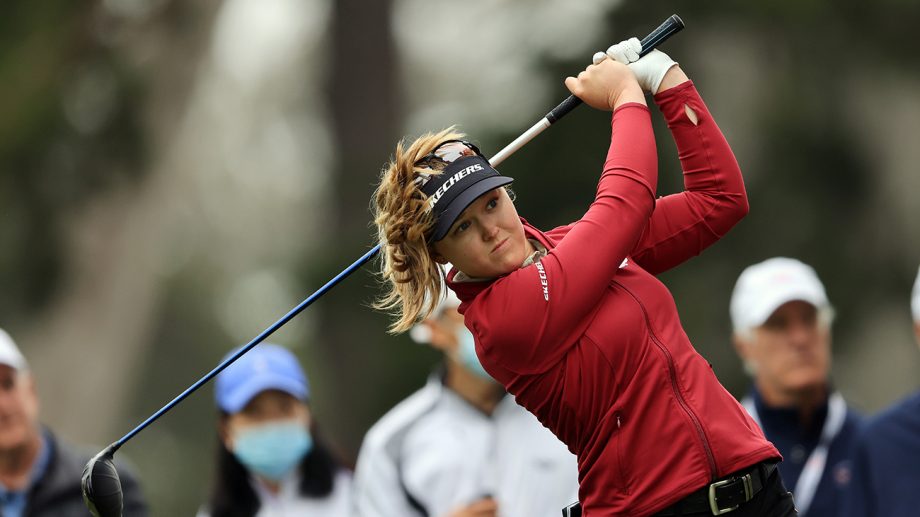 SAN FRANCISCO, CALIFORNIA - JUNE 03: Brooke Henderson hits her tee shot on the ninth hole during the first round of the 76th U.S. Women's Open Championship at The Olympic Club on June 03, 2021 in San Francisco, California. (Photo by Sean M. Haffey/Getty Images)
Associated Press

SAN FRANCISCO (AP) – High school junior Megha Ganne shot a 4-under 67 on Thursday to become the first amateur in 15 years to have a share of the lead after any round at the U.S. Women’s Open.

The 17-year-old from New Jersey made back-to-back birdies on the back nine to take sole possession of the lead before making bogey on the 18th hole to end the day in a tie with Mel Reid on the Lake Course at the Olympic Club.

Ganne became the first amateur to lead after a round at the women’s Open since Jane Park did it after one round at Newport Country Club in 2006.

Ganne needed a playoff last month to qualify for her second career U.S. Open but felt much more comfortable once she got here than she did two years ago when she missed the cut.

“I think the first time is nerve-racking for anybody and meeting your idols and being on the stage for the first time,” she said. “But the second time around, even the practice rounds, I wasn’t as nervous. I felt like I could come here and just play my game instead of soaking that all in.”

She did just that up the road from Stanford where she plans to go to college after graduating high school next year. She birdied three of the first eight holes and made three more on the back nine to overcome a pair of bogeys.

She made one of her few mistakes on 18 when she hit her approach shot into a greenside bunker.

The notoriously tough Lake Course played a little easier than usual after the rough was trimmed a bit before the round. Fifteen players shot under par with Canada’s Brooke Henderson, and Americans Angel Yin and Megan Khang one shot back. Henderson three-putted from less than 20 feet on the 18th hole to fall out of a share of the lead.

Rebecca Lee-Bentham of Toronto shot a 76 and Noemie Pare of Victoriaville, Que., shot an 80. Megan Osland of Kelowna, B.C., withdrew.

Other notable players include defending champion A Lim Kim of South Korea, who struggled at 6 over, and 2014 champion Michelle Wie West, who shot 74.

This marked the first time the women came to the Lake Course overlooking the Pacific Ocean for a major. But this venue has a rich history for the men, hosting five U.S. Opens and three U.S. Amateurs among other events.

The course that played at 6,361 yards Thursday has traditionally played as one of the tougher ones despite having no water hazards and only one fairway bunker. Only four men broke par at the five U.S. Opens here, including none the past two times with Lee Janzen winning at even par in 1998 and Webb Simpson a 1 over in 2012.

Reid set the pace in the morning. The Englishwoman started at the ninth hole and hit her first two approach shots within 10 feet for birdies on the par 4s. She added birdies on Nos. 15 and 16, another on her second-to-last hole and had only one bogey all round.

“I didn’t think that score was out there honestly,” she said. “I had a pretty good game plan. It’s probably the best I’ve had for a tournament. We had a game plan and stuck to it. If you’re in trouble, just get it out, make bogey. I think the key here is to not take many risks the first two, three days, and I didn’t do that.”

Reid, who won her first LPGA Tour title last October to go with her six career wins on the European Tour, has had little career success at the U.S. Women’s Open. She missed the cut four of her previous five times at this tournament and finished tied for 50th in her other appearance in 2012.

Reid said she was helped by a couple of long conversations with two-time men’s U.S. Open champion Brooks Koepka that she carried over into the round.

While Reid used a fast start to get to the top of the leaderboard, Yin finished strong by making eagle on the par-5 17th and birdie on the par-4 18th to get within one shot of the lead. The American’s 60-foot putt on 17 helped overcome back-to-back bogeys on the front nine.

One of the featured groups in the morning featured sisters Jessica and Nelly Korda, the daughters of 1998 Australian Open men’s tennis champion Petr Korda. Their parents took advantage of the grouping and got to watch both daughters at once.

Jessica birdied three of her first five holes before finishing at 72, while Nelly shot 78.