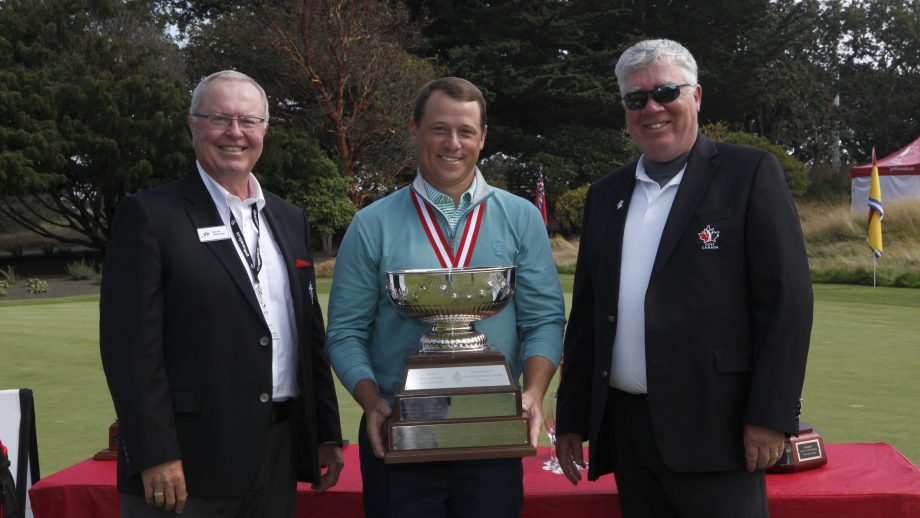 VICTORIA, B.C. – Victoria Golf Club continued to test some of the best mid-amateur golfers for the fourth consecutive day, but nothing could stop Joseph Deraney as he rose to the challenge and shot a spectacular 65 to capture the 2018 Canadian Men’s Mid-Amateur title on Friday.

Starting his day in sixth position, Deraney got off to a hard and fast start with back-to-back birdies on his first two holes. From there the 35-year-old never looked back, answering a solo bogey with four more birdies to win the championship by a 3-stroke margin at 4-under-par 276.

“I’m really excited, I played really flawless, good shot after good shot,” said Deraney. “Earlier in the round I had a couple of 15 footers go in, which honestly I haven’t had all week so I got some momentum going.”

With his victory, the Lexington, Ky., native becomes only the second American to win the tournament. Previously, Deraney’s best finish at the tournament was T4 in 2016. This year’s win secures him an exemption into the 2019 RBC Canadian Open, his first PGA Tour event, to be held at Hamilton Golf & Country Club.

Deraney may be on top of the world with wins at this tournament alongside victories at the Timuquana Cup and Carlton Woods Invitational earlier this year, but there was one thing more that made the Canadian Men’s Mid-Amateur a highlight.

“I’ve been fortunate enough to win some national mid-ams in the US, not any of the USGA ones but some of the national bigger ones,” said the dad of three. “Probably this venue and where it’s at and the fact that me and my wife got to spend some time together, I would have to say that it would be at the top if not the top.”

Two-time Men’s Mid-Amateur champion Kevin Carrigan finished the event in second. The Victoria, B.C., native struggled with three bogeys across his first nine holes but recovered on the back-nine under the eyes of a hometown crowd by recording two birdies to finish at 1-under-par 279.

Another home crowd favourite and host club member, Saare Adams, started the day in the lead but fell back after he shot a final-round 73. The 34-year-old finished sharing a piece of third with 36-hole leader Garrett Rank.

Rank started the day in a tie for second after a difficult third round. He started off well with a birdie on the first hole and was tied for the lead at one point during the day. However, the 30-year-old couldn’t find his footing and dropped to fifth until back-to-back birdies on the 15th and 16th holes saw him finish in a tie for third at an even-par 280.

The Mid-Master division came down to the wire as Sandy Harper and defending champion Todd Fanning spent the day paired up in a battle for the win. The duo made the turn with Harper leading by two, but the 61-year-old spent the back-nine switching between leading and sharing the lead with Fanning. After parring their final hole, the two were sent to playoff action to determine the winner.

It was an all too familiar situation for Fanning, who won the Mid-Amateur title in a three-man playoff last year.

“The playoff is the thing for me at this tournament,” said the 50-year-old. “I wish I was in the playoff for the Mid-Am but Joe played fantastic so hats off to him.”

Fanning came out on top as his bunker shot rolled into the hole for an eagle over Harper’s birdie to take home his second consecutive Mid-Master title while Harper settled for second.

“What a great week by all the people and the members of Victoria Golf Club. I can’t think of a better venue for the mid-amateur and it’s going to be tough to top this,” added Fanning. “At 50 years old, even when you’re the best 40-and-over amateur in Canada two years in a row that does feel quite good.”

Victoria’s own Craig Doell finished one shot behind them in third at 5-over-par 285.

On Wednesday, Team Ontario defended their inter-provincial title, securing the R. Bruce Forbes Trophy for the fourth straight year to bring their total titles to 14.