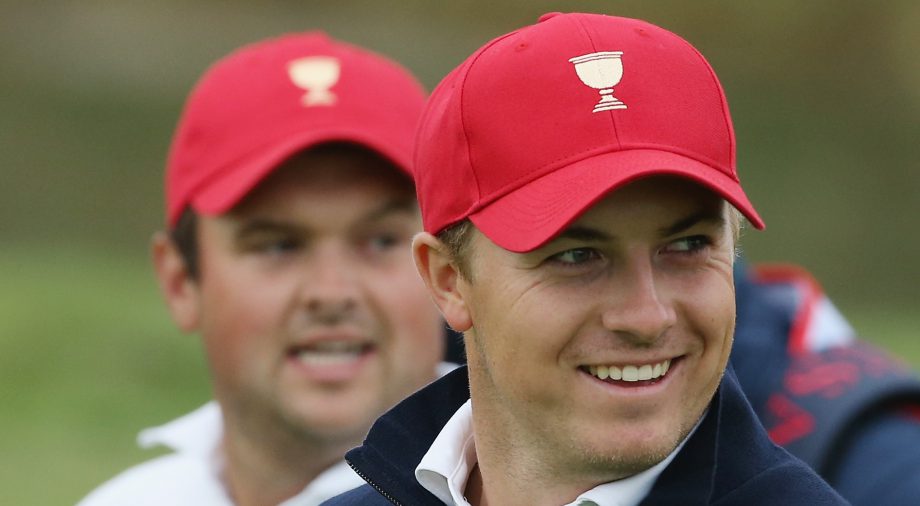 INCHEON, South Korea – Jordan Spieth made 7-foot putts on the final two holes to complete the biggest comeback all week and allow the Americans to escape with a split of the foursomes matches Saturday morning in the Presidents Cup.

The Americans had a 7 1/2-6 1/2 lead going into the four matches of fourballs in the afternoon.

The lead could easily have belonged to either team during a final hour at the Jack Nicklaus Golf Club Korea that featured clutch putts and big blunders.

The only match that lacked any drama was Louis Oosthuizen and Branden Grace, the International juggernaut this week. They stayed undefeated for the week in a 3-and-2 victory over Rickie Fowler and Patrick Reed.

Spieth and Dustin Johnson were 3 down at the turn to Jason Day and Charl Schwartzel and still two holes behind when Schwartzel came up short and into a creek with a wedge from the 14th fairway. It was the first of two big mistakes by Schwartzel.

Johnson hit his tee shot to 7 feet on the par-3 17th, and Spieth poured in the putt to square the match. Both teams missed the fairway, and Schwartzel tried to reach the green from a bunker. He missed it so badly that the ball barely left the ground, smacked into the base of the lip and stayed in the bunker. The International team made bogey.

Spieth, however, played overly cautious with a wedge that left Johnson a 30-foot putt that was extremely fast at the hole, and he ran it 7 feet by. Spieth had to make that par putt for the win, and one of golf’s best putters left little doubt.

“We could have made it a little easier from 90 yards out. I could have gotten us below the hole,” Spieth said. “But man, what a comeback we had there. That was a great fight. And it was a huge point in The Presidents Cup.”

The Americans lost chances to pick up wins in the other two matches.

Bubba Watson and J.B. Holmes looked a like a sure winner when Watson hit the green on the par-5 18th shot with his second shot, while the International team had to lay up and Leishman’s third shot with a wedge was some 30 feet short.

Holmes ran the long eagle putt about 5 feet by the hole, and Scott was furious with himself when his birdie putt – that seemed to be the best chance for a halve – ran about 8 feet by the hole. Leishman made his putt for par, and Watson missed the 5-foot birdie putt for the win.

The Americans had control of the other match, too, going 1 up on the par-3 17th when Bae Sang-moon’s touch chip failed to reach the green, allowing Bill Haas and Matt Kuchar to go 1 up heading to the 18th.

Hideki Matsuyama hit his second shot to about 25 feet for a certain birdie. Haas went over the green with his second shot, and Kuchar’s chip wasn’t strong enough and failed to reach the green. The International team won with a birdie for a half-point.

For the fourballs session, U.S. captain Jay Haas kept Watson and Holmes together for a fourth straight match, while Johnson sat out the session and Spieth was with Reed, his partner from the Ryder Cup.

Scott had his fourth partner in four matches, this time going with Anirban Lahiri.