Americans add to lead at Presidents Cup as Canada’s Conners, Pendrith paired together 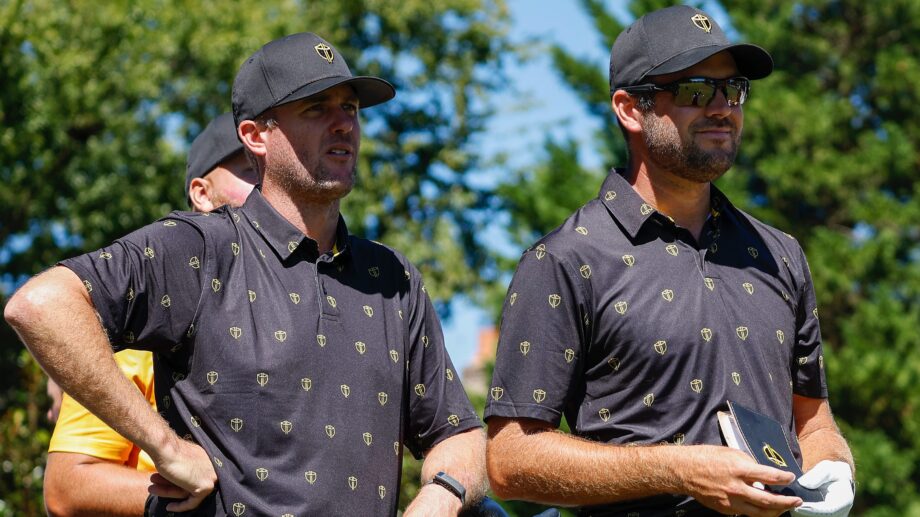 Taylor Pendrith of Canada and the International Team and Corey Conners of Canada and the International Team look on from the fourth tee during Friday four-ball matches on day two of the 2022 Presidents Cup at Quail Hollow Country Club on September 23, 2022 in Charlotte, North Carolina. (Photo by Jared C. Tilton/Getty Images)
John Chidley-Hill/ Canadian Press

CHARLOTTE, N.C. – Taylor Pendrith centred himself over the ball, took a breath, and rolled his putt 13 feet, five inches into the hole. He pumped his fist and embraced partner Corey Conners on the 18th green as the international team celebrated on the fairway and fans cheered.

Pendrith’s putt kept the hopes of a draw against Americans Billy Horschel and Max Homa alive in the second round of the Presidents Cup, a potentially critical half point for the international team.

But Homa extinguished those hopes a moment later when he drained his 11-foot putt for a bigger fist pump, a louder cheer, and a 1 up win over the Canadians. That victory also gave the Americans a commanding 8-2 lead over the internationals on Friday at Quail Hollow Golf Club.

“I still feel like there’s some adrenalin flowing,” said Conners on the lip of the 18th green after the loss. “It’s tough. We played against some world class players.

“The atmosphere’s pretty loud, there’s a lot going on. You try to enjoy it, but it’s definitely challenging.”

“To pair up today is really special,” said Conners, who also went to Kent State University with Pendrith. “Hopefully we’ve got a couple more in us, and we’ll see if we can get some points the rest of the way.”

Conners, from Listowel, Ont., will be paired with South Korea’s Sungjae Im for foursome play in the third round Saturday morning. The pairings for Saturday afternoon’s fourth round will be announced after the completion of the third round.

The first team to 15.5 points wins the PGA Tour-sponsored event, with the Americans’ sizable lead putting Sunday’s fifth round at risk of not being played at all.

“We’ve just got to keep fighting, man,” said team captain Trevor Immelman of South Africa. “Keep putting one foot in front of the other.

“We feel like we’ve played some pretty good golf, some solid golf tee-to-green, particularly the last couple of days, but we have absolutely been outputted. No doubt about it.”

Both of the Canadians showed off their specialties throughout the match. Pendrith had the longest drive on eight of the foursome’s holes, consistently hitting the fairway. Conners, meanwhile, was unerring in his approach shots, regularly dropping in closest to the pin.

Their displays of power and accuracy even wowed the loudly pro-American crowd at Quail Hollow, earning loud rounds of applause, whistles as the long shots flew through the air, and calls of “Maple syrup!” and “Peameal bacon!”

“We just try to play our own games,” said Conners. “I try to do what I do well. I try to get it on the fairway, get it on the green, have some birdie looks and free up Taylor to hit the balls and attack some of those pins.”

“It stings a little bit. Max made two really nice putts on the last two holes,” said Pendrith, who is from Richmond Hill, Ont. “We battled very hard but didn’t have our best stuff early in the round. Good enough to stick around.”

Officials said that about 40,000 fans attended each of the first two days at the Presidents Cup, with a similarly large crowd expected on Saturday and, if play continues, the same number on Sunday. The most notable people in Friday’s crowds were former U.S. Presidents George W. Bush and Bill Clinton, who arrived at Quail Hollow Club several hours before Scott, Davis, Spieth and Thomas teed off in the day’s first group.