Americans jump out to another lead in Presidents Cup 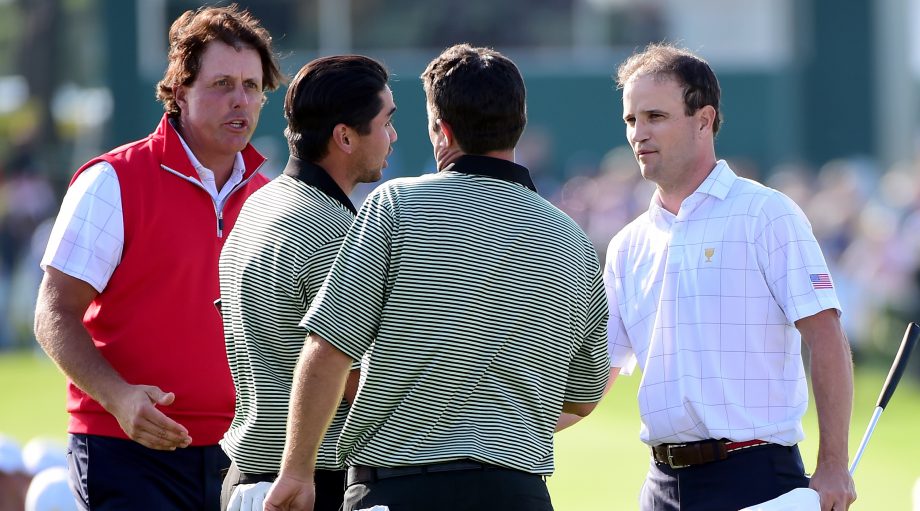 INCHEON, South Korea – The Presidents Cup wasn’t an hour old when Nick Price looked at the scoreboard and had that sinking feeling.

It was filled with American red.

And there wasn’t much Price or the International team could do about it Thursday in an opening session that ended just like so many others in this one-sided affair.

Phil Mickelson and Zach Johnson capped off a performance that was as businesslike as their handshakes, and the Americans had a 4-1 lead after foursomes in which they never trailed in any match except the one they lost.

“A tough day for us,” Price said. “Having said that, we are only five points into 30. We still have another 25 points left out there. So we’ve got a long way to go, and that’s that I told my team. Just to keep their chins up and do the best they can tomorrow.”

The International team was adamant that the number of matches be reduced – it was lowered from 34 to 30 – to keep it a close contest. After one day, maybe having one less match on Thursday helped.

It could have been worse.

The Americans, who have lost the Presidents Cup only one time since it began in 1994 and are going for their sixth straight victory, had a lead after the opening session for the fifth straight time. The margin was their largest since a four-point lead in 2007 at Royal Montreal.

That makes the five matches of fourballs on Friday even more critical.

“He’s going for the kill,” Price said. “If we get momentum going, it can change things.”

All the momentum belonged to the Americans on Thursday.

Bubba Watson and J.B. Holmes ran off four straight birdies early in their match against Adam Scott and Hideki Matsuyama, and that set the tone. They wound up winning a tight match when Scott and Matsuyama missed key putts and ended it on the 16th hole.

“That was my whole goal,” Watson said. “Get out there fast, change the color so the other guys see that and it sparks them going forward.”

Watson and Holmes didn’t deliver the first point. That came from Fowler and Walker, who are unbeaten as a team but picked up their first win. They halved their three matches at the Ryder Cup last year, and they had the shortest match at the Jack Nicklaus Golf Club Korea, 5 and 4, over Anirban Lahiri and Thongchai Jaidee.

The lone International victory came from Louis Oosthuizen and Branden Grace of South Africa, who took advantage of some sloppy play by Matt Kuchar and Patrick Reed in a 3-and-2 victory. Kuchar hit a tee shot into the water on No. 11, and he hit a wedge so far on No. 14 that it didn’t even reach the creek.

Grace went 0-4 in his Presidents Cup debut two years ago, and the South Africans gave the International team at least some hope.

“I know we’re behind,” Grace said, glancing at a scoreboard behind him. “But one point is better than none.”

The Americans got help from top to bottom.

Spieth, coming off a year of two majors, the FedEx Cup and the No. 1 ranking, and Dustin Johnson made for a formidable duo. They set the tone early when Spieth holed a 20-foot birdie putt on No. 2, and Johnson stepped up on the next hole and hammered a tee shot nearly 350 yards.

They halved that hole, but a message was sent.

“Me hitting bomb drives, Jordan holing putts,” Johnson said. “That’s what you want to get in their heads.”

Johnson had a few wild drives, too, but they restored their cushion early on the back nine and coasted to a 4-and-3 victory.

Mickelson had to rely on a captain’s pick for the first time since the inaugural Presidents Cup in 1994. Players wanted him on the team for his experience and enthusiasm, and the Hall of Famer showed he was more than capable with a club in his hand. Mickelson holed a bunker shot on the par-3 13th to go 2 up, and he came up big with a key drive on the 18th with water down the right side.

Jason Day, coming off a five-win season that included his first major, did his part to extend the match. Day holed a 40-foot birdie putt on the 17th hole to keep alive hopes of at least earning a half-point. But on the closing par 5, Mickelson’s big drive set up nothing more than a 7-iron for Zach Johnson, and he put it 10 feet below the hole.

Day’s eagle putt from about 18 feet slid by on the left, and he and fellow Aussie Steven Bowditch conceded the eagle to Mickelson for a 2-up U.S. win.

“It’s tough when you go out there and you see all the red and we’re down,” Price said. “I’m certainly not despondent about the whole thing. I think this team is going to bounce back a lot quicker than maybe any of the other teams we’ve had. I don’t know, we’ll have to wait and see.”