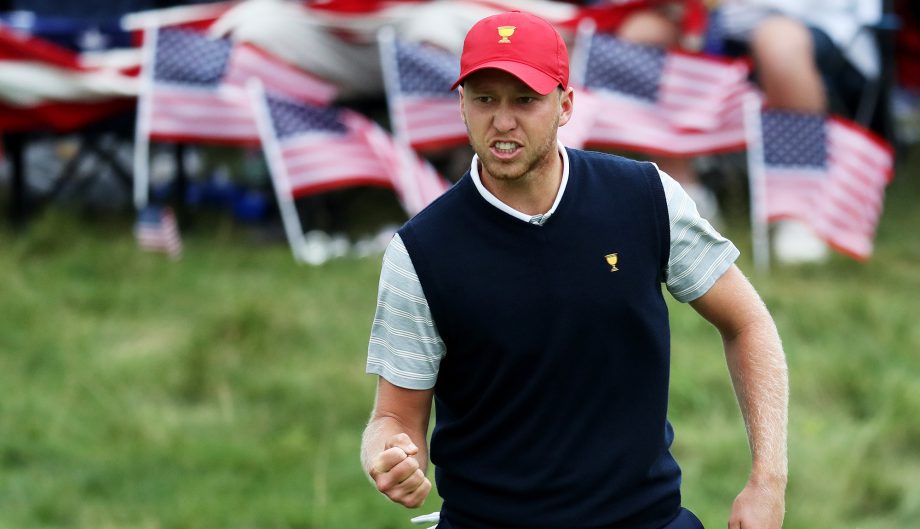 JERSEY CITY, N.J. – The Americans came within one match of winning the Presidents Cup.

Anirban Lahiri made two clutch birdies that only delayed the inevitable. This is a powerful U.S. team playing to its full potential, and the result is the biggest blowout since these matches began in 1994.

Lahiri and Si Woo Kim had the only victory for the International team over two sessions. From the sun rising over the Manhattan until the chilly twilight at Liberty National, the American poured it on. They had a 14 1/2-3 1/2 lead and need only one point Sunday to win the cup for seventh straight time.

Phil Mickelson set a Presidents Cup record with his 25th victory, breaking the record set by Tiger Woods. Mickelson hit two wedges into birdie range in the morning foursomes session with Kevin Kisner, when the Americans won three matches and halved the other.

Jordan Spieth’s best intentions cost him a hole in a ruling rarely seen in match play, though that didn’t matter. All that did was inspire Spieth and Patrick Reed to win yet another match. They are 8-1-3 as a partnership in the Presidents Cup and Ryder Cup.

Justin Thomas made another big birdie on the 14th hole and cupped his hand to his ear, covered by a beanie in the chill, to fire up a crowd that didn’t need much help. Even in the lone loss of the day, the Americans made it hard on them. Charley Hoffman chipped in from short of the 17th green and body-slammed partner Kevin Chappell, a celebration that lasted only long enough for Lahiri to match his birdie with a 20-foot putt.

Lahiri and Kim were 1 up playing the par-3 18th, and when Lahiri chipped to 3 feet and both Americans were in the bunker, they chose not to concede Lahiri’s putt until after Chappell had made par.

It was meaningless in the big picture, yet it illustrated clearly – along with all the celebrations – that no victory is too big for this U.S. team.

Hoffman was aware that his match could have ended it.

“We knew what was on our shoulders,” said Hoffman, the 40-year-old who had never been in a team competition as a pro. “I didn’t have my best stuff all day long, but I had a chance. Got to give it up to Lahiri. He made some great birdies coming down the stretch, and they knocked us off.”

The 11-point margin is the largest going into the 12 singles matches, breaking the International record of nine points set in 1998 at Royal Melbourne, the only time it has ever won the Presidents Cup. The 2003 matches ended in a tie.

Canada’s Adam Hadwin will square off against Phil Mickelson at 1:54 p.m. local time

While the outcome was inevitable, this day still had its moment, none more peculiar than the 12th hole.

Jason Day was already down for a birdie. Spieth had 12 feet for his birdie, while Louis Oosthuizen hit his drive behind the green on the reachable par 4 and had a shot at eagle. The ball raced by the hole and was headed down the slope with water on the other side, and the partisan American crowd was urging it to keep going.

Spieth had heard enough and reached over and scooped away the moving ball with his putter.

Match referee Andy McFee, a top rules chief on the European Tour, stepped in and informed Spieth that it was a violation of the first rule in golf (Rule 1-2): “A player must not take an action with the intent to influence the movement of a ball in play.”

No player would ever do that in stroke play (though John Daly and Kirk Triplett did it to their golf balls on U.S. Open greens). Spieth figured the International team already had its birdie. Even so, the rule meant Spieth was disqualified from the hole, even as Oosthuizen and Day protested.

“I’m sorry for trying to do the right thing,” Spieth said to McFee, a mixture of sarcasm and frustration.

Day went 0-4-1 in the Presidents Cup two years ago. He heads into singles with a 0-3-1 mark at Liberty National. Hideki Matsuyama has failed to win a match. Adam Scott is 0-3 and sat out the Saturday afternoon session.

Dustin Johnson extended his record to 4-0 this week, teaming with Matt Kuchar for an easy victory in foursomes and riding U.S. Open champion Brooks Koepka and his hot putter for a 3-and-2 victory that put the Americans on the cusp of victory.

The celebration will have to wait. Lahiri missed a 3 1/2-foot putt on the 18th hole that cost the International team a rare victory in South Korea two years ago. This time he saved his team, if only for a day.