Americans running away in the Presidents Cup 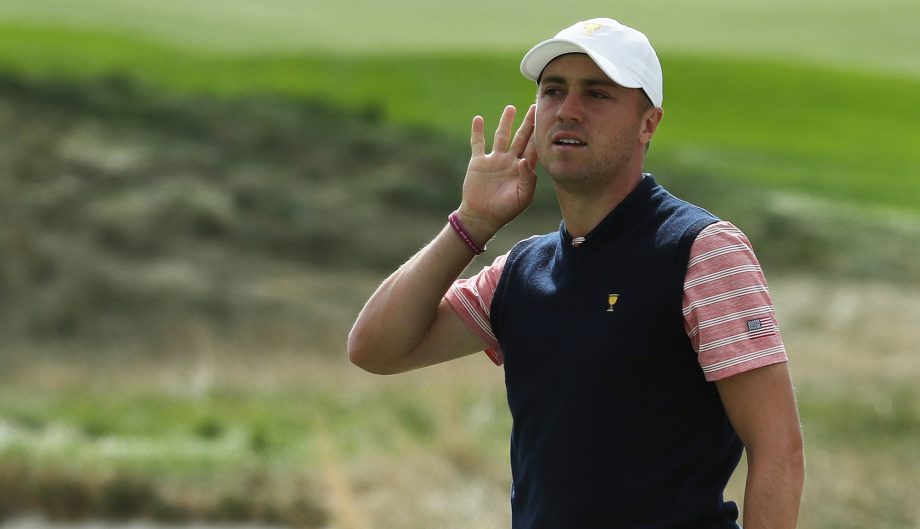 JERSEY CITY, N.J. – Phil Mickelson and Kevin Kisner rehearsed the dance from “Three Amigos.” The only question was whether to use it at the Presidents Cup, and as the veteran of 23 team events, Mickelson concluded it would need to be a big moment.

Their match was all square on the 18th hole Friday. Mickelson was 12 feet away for birdie. A victory would give the Americans a record lead.

“If this putt goes in,” Mickelson said he told his rookie partner, “we’re going to dance.”

This turned out to be one big dance party for an American team that has gone nearly two decades without losing. They hammered the International teams on the back nine to go unbeaten in fourballs and build an 8-2 lead, the largest margin after two sessions since the Presidents Cup began in 1994.

Mickelson had his 24th match victory to tie the Presidents Cup record held by Tiger Woods, and he set a record with his 10th victory in fourballs.

As for that dance ?

It looked a little awkward, though Mickelson did slightly better than when he cropped most of his face out of a selfie he took during the opening ceremony with the last three U.S. presidents.

So can his teammates, who have followed the script set out by U.S. captain Steve Stricker to win every session. They won handily in the other three matches. The other match was a halve, but even in that one, Hideki Matsuyama and Adam Hadwin had a 2-up lead with four holes to play until Jordan Spieth and Patrick Reed rallied. The Americans nearly won that one, too, except that Spieth narrowly missed birdie putts on the last two holes.

“Our guys stepped up again,” Stricker said. “They have a knack for doing that. To finish like that is huge for us going into tomorrow.”

Mathematically, the International team could be done Saturday, the first day of a double session – four matches of foursomes in the morning, following by four matches of fourballs in the afternoon. The Americans are 7 1/2 points away from clinching the cup.

“I think we saw the strength of the U.S. team come out today,” Price said.

Price was not about to give up, hopeful of gaining some momentum in the morning and riding it into the afternoon ahead of the 12 singles matches on the final day.

“We’re only 10 points through 30. There’s 20 points left,” Price said. “We are not laying down. These guys are going to come out fighting over the next two days, and especially tomorrow.”

Justin Thomas, already with a big year behind him as a major champion and the FedEx Cup champion, teamed with Rickie Fowler for another easy victory. They have trailed only one hole in their two matches, and they became the first partnership to beat Louis Oosthuizen and Branden Grace.

They took the lead for good when Fowler made a 15-foot birdie putt on the third hole, and then Thomas produced the loudest cheer of the afternoon at a pivotal moment on the 14th hole. Oosthuizen hit his approach to 6 feet, while both Americans missed the green. From the left bunker, Thomas blasted out perfectly and watched it drop in for a birdie that kept the International team from cutting the deficit to 1 down.

Thomas birdied the next hole, and his bunker shot on the 16th hit the pin and somehow stayed out.

The shortest match of the day belonged to a pair of American rookies, Kevin Chappell and Charley Hoffman, who sat out the foursomes matches in the opening session. They were 3 up after four holes against Charl Schwartzel and Anirban Lahiri and never let up in a 6-and-5 victory.

Dustin Johnson and Brooks Koepka, close friends and the last two U.S. Open champions, took their first lead on the par-3 10th with Koepka’s birdie, and Johnson showed rare emotion on his final two birdies in a 3-and-2 victory over Adam Scott and Jhonattan Vegas.

Scott set a record of his own – it was his 19th loss in the Presidents Cup, breaking the record held by Ernie Els.

The Americans have a 9-1-1 lead in the series, their only loss coming in 1998 at Royal Melbourne. But it has at least been close after the opening two sessions, with neither side leading by more than two points since 1998.