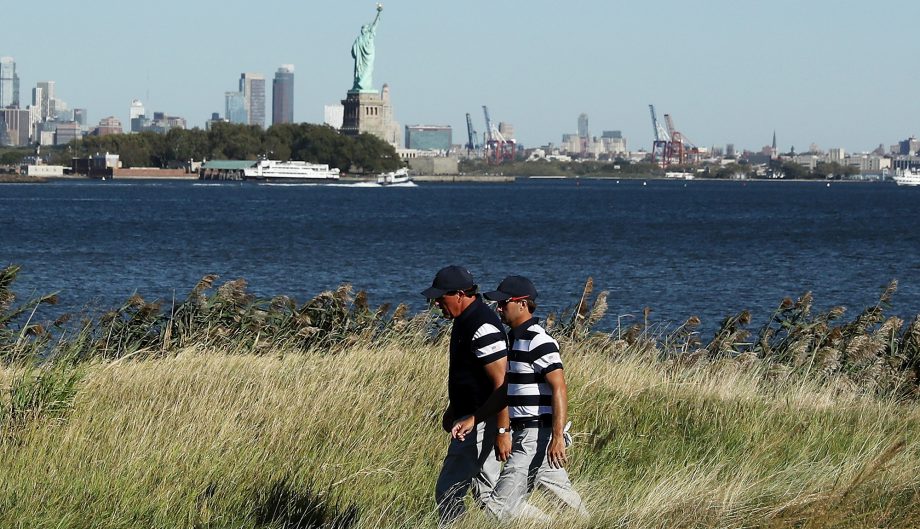 JERSEY CITY, N.J. – The opening ceremony at the Presidents Cup was unlike any other in golf with former Presidents Barack Obama, George W. Bush and Bill Clinton on the first tee.

The results were all too familiar.

The Americans led at some point in all five of the foursomes matches Thursday at Liberty National. They won the first three. And when they jumped on a ferry to take them across the New York Harbor to their Manhattan hotel, they had the lead.

The U.S. Team surged into the lead after Day 1 of the @PresidentsCup. pic.twitter.com/M1DOLBsqQi

Behind a new tandem of Rickie Fowler and Justin Thomas, and an old one of Jordan Spieth and Patrick Reed, the Americans jumped out to a 3 1/2-1 1/2 lead. It was the sixth consecutive time they led after the opening session in an event they haven’t lost in two decades.

“Jordan mentioned that this first session is pretty critical and we need to go out there and take care of business,” Fowler said. “I feel like as a team, we did a really good job of that. If we can do the same thing tomorrow and win another session, it puts us in a great position.”

Thomas and Fowler lost only two holes in a 6-and-4 victory over Hideki Matsuyama and Charl Schwartzel. Spieth and Reed improved to 6-1-2 as a tandem in the Presidents Cup and Ryder Cup. Spieth holed a 35-foot putt on the 11th hole right when it looked as if Emiliano Grillo and Si Woo Kim might gain some momentum. Instead, the match was over three holes later, 5 and 4.

Dustin Johnson and Matt Kuchar remained unbeaten in four matches, not taking the lead until the 16th hole and making it stand in a 1-up victory over Adam Scott and Jhonattan Vegas.

“We’ve been off to poor starts for a while on Thursdays,” International captain Nick Price said. “We have a resilient team. They have this ability to come back and bounce back, and they have done it. They did it last time in Korea.”

Indeed, the Americans had a 4-1 lead after the first session two years ago, and that Presidents Cup came down to the final match.

Phil Mickelson, playing in his 23rd consecutive team competition, ended the tough, wind-swept afternoon at Liberty National by missing an 8-foot par putt, or the U.S. lead would have been even greater. He and Kevin Kisner were 1 down with two holes remaining to Jason Day and Marc Leishman, so a half-point wasn’t bad.

Mickelson’s only complaint was that he botched his selfie with the presidents, with barely his head showing.

For the most part, everything else went the Americans’ way.

The lone bright spot for the International team was Louis Oosthuizen and Branden Grace, who improved to 5-0 as a tandem. The South African duo pulled away for a 3-and-1 victory over U.S. Open champion Brooks Koepka and Daniel Berger.

“Listen, we’re a half-point better than last time, so that’s a big up for us,” Grace said. “We’ve got a great team. We all want it really badly. … I’m sure we’re going to have a good night and then going to come back tomorrow blazing.”

The stars on this day didn’t hit a shot.

The leader of every country where the Presidents Cup is held are invited to be honorary chairman, but this was a first – three U.S. presidents together at this event, sitting together in a box on the first tee and then posing with the trophy, the players and their wives.

“I was looking forward to this Presidents Cup for a very long time, and I didn’t expect all the presidents to be there,” Schwartzel said. “Just to get to meet them was a dream come true for me. Then to hit that first tee shot with the wind pumping off the right was quite intimidating.”

The Americans have a 9-1-1 lead in the series, their lone loss in 1998 at Royal Melbourne a few weeks before Christmas.

The gusts topped 20 mph and felt even stronger on exposed areas of Liberty National, which sits across New York Harbor from Manhattan.

The par-3 10th hole was so difficult to judge the wind that Scott hit a tee shot that sailed over the green into a hazard, while Spieth in the match behind him came up some 60 feet short of the hole in a bunker.

Johnson and Kuchar didn’t make a single bogey, remarkable in the format and in the wind, and they still didn’t take the lead until Johnson’s tee shot on the par-3 16th with a strong wind at his back stopped 5 feet away. Scott came up short, and then missed a 6-foot par putt.

“In alternate shot, in these conditions, not to make a bogey and for us to just win 1 up, that’s a heck of a battle that we had with those guys,” Kuchar said.

Friday features five matches of fourballs, followed by a full day of foursomes and fourballs Saturday and the decisive Sunday singles.

“There’s still a long, long ways to go,” U.S. captain Steve Stricker said. “But we very much liked the day and the way it started.”