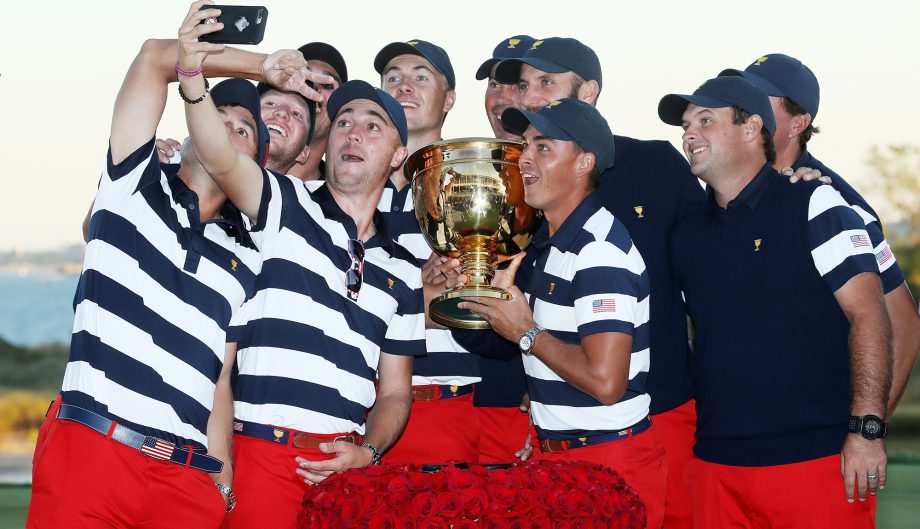 JERSEY CITY, N.J. – The Americans won the Presidents Cup for the seventh straight time, and this one was no contest.

With most of the work already done, a dominant U.S. team needed only one point from the 12 singles matches Sunday. Kevin Chappell halved the first match with Marc Leishman, and victory was assured when Daniel Berger went 3 up with three to play against Si Woo Kim in the fourth match.

Berger wound up winning his match, and the celebration was on.

The last point came from Phil Mickelson, a 47-year-old on an American team that featured six players in their 20s. Mickelson has played in every Presidents Cup since it began in 1994. This was his 23rd straight team in the Presidents Cup and Ryder Cup. And in his 100th career match, he beat Adam Hadwin of Abbotsford, B.C., 2 and 1.

The Americans fell short of their goal to become the first Presidents Cup team to win all five sessions. The Internationals won six matches and halved two others. One of those victories belonged to Jhonattan Vegas, who waved his Venezuela flag after beating Jordan Spieth, keeping Spieth winless in singles in his five team competitions as a pro.

President Donald Trump arrived at Liberty National about 45 minutes before the Americans secured the gold trophy that he was to present to them. Trump, the honorary chairman of the matches, is the first sitting president to attend on the final day and present the trophy.

“This is a juggernaut of a U.S. team,” said Nick Price, in his third and final stint of the International captain, all of them losses. “They’re an overpowering team that played some phenomenal golf. It was tough to watch, especially being on the receiving end.”

The Americans had an 11-point lead going into Sunday. All that remained was the margin of victory, and to see if they could become the first team to win all five sessions in the Presidents Cup.

That was the motivation from U.S. captain Steve Stricker, and the players responded with some of their best golf.

So thorough was this beating that Chappell and Charley Hoffman could have clinched the cup Saturday evening if they had won their fourballs match. Stricker sent them out at the top of his lineup to give them a chance to finish the job. Chappell nearly did. Hoffman was beaten by Jason Day, who had gone nine straight matches without winning until a 2-and-1 victory.

Instead, the clinching match fell to Berger, who had told Sky Sports in an interview Saturday, “Our goal from the minute we got here was to crush them as bad as we can. I hope that we close them out today and we go out there tomorrow and beat them even worse.”

Berger won his match on the 17th green with the Americans who had finished gathered around and ready to start their party. Hoffman ran over and sprayed Berger with champagne, and Berger took a swig from the bottle before handing it over to Stricker for a quick guzzle.

“They came in here riding a ton of momentum and a ton of confidence,” Stricker said. “It was about getting out of their way.”

The Americans have a 10-1-1 record in the Presidents Cup. The only loss was at Royal Melbourne in 1998, which ended just 12 days before Christmas. The matches return to Australia in two years for another pre-Christmas test for the Americans.

“It was a bit of a slaughtering this week,” said Adam Scott, who won his first point of the week by beating U.S. Open champion Brooks Koepka.