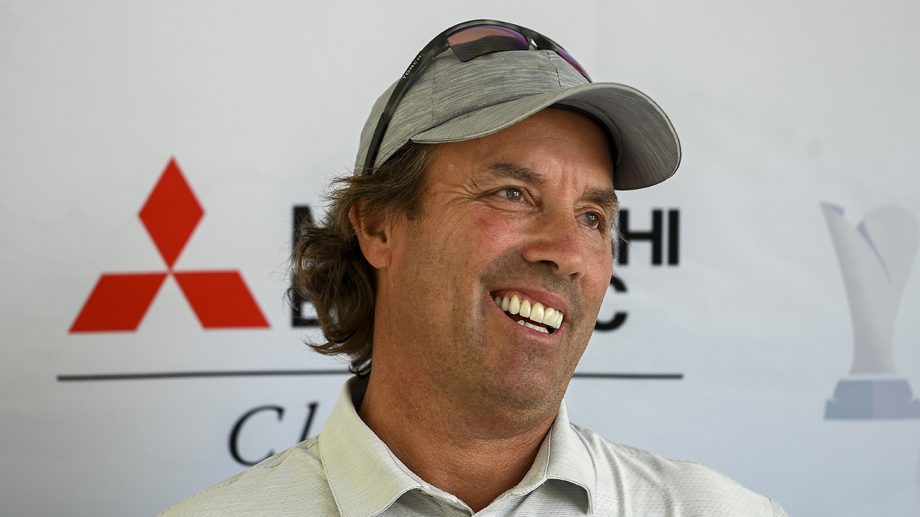 DULUTH, GA - MAY 14: Stephen Ames of Canada talks to the media after posting a 66 during the first round of the PGA TOUR Champions Mitsubishi Electric Classic at TPC Sugarloaf on May 14, 2021 in Duluth, Georgia. (Photo by Tracy Wilcox/PGA TOUR via Getty Images)
Golf Canada

DULUTH, Ga. (AP) – Monday qualifier Dicky Pride won the Mitsubishi Electric Classic on Sunday for his first PGA Tour Champions title, closing with a 5-under 67 for a three-stroke victory.

Making his 11th senior start, the 51-year-old Pride had six birdies in an 11-hole stretch before dropping a stroke on the par-4 15th. He parred the final three.

Calgary’s Stephen Ames and Kirk Triplett each shot 70 to tie for second with second-round leader Paul Goydos (72). Brett Quigley (68), Doug Barron (69) and Billy Andrade (72) were another stroke back.

Pride finished at 11-under 205 at TPC Sugarloaf, a week after contending in the major Regions Tradition in his home state of Alabama. He won the 1994 St. Jude Classic for his lone PGA Tour victory and also won a Korn Ferry Tour event in Oregon in 2015.

After an opening 71, Pride had the best scores in the field the last two days, also shooting a 67 on Saturday to pull within two strokes of Goydos.