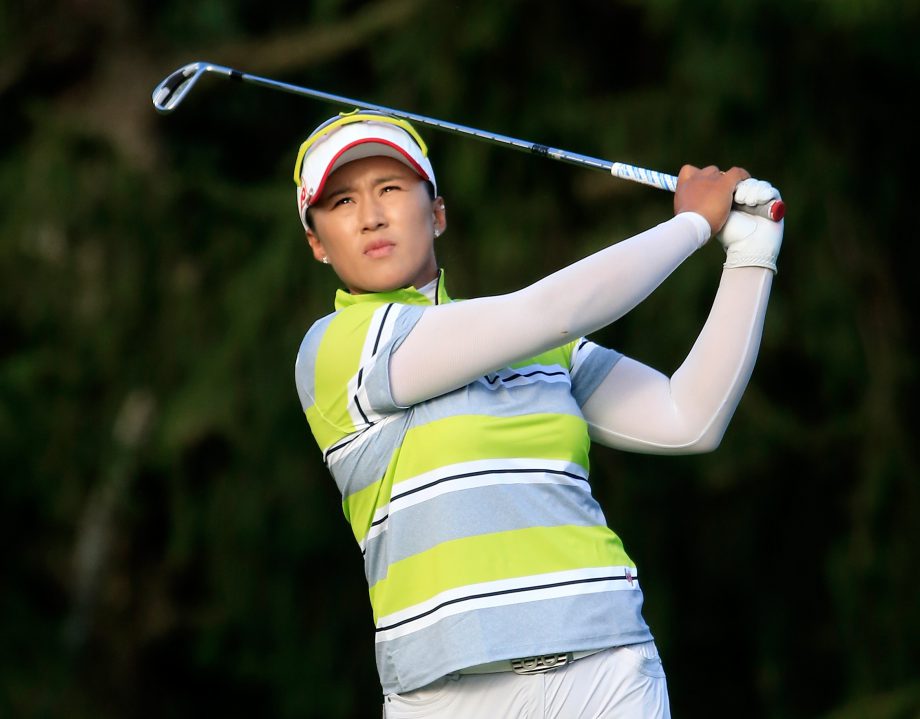 The 25-year-old South Korean went on a four-birdie run Friday, charging to a three-stroke lead after two rounds at Lancaster Country Club and putting her in position – again – to make a run at her first major championship.

The day started early for 55 players, who resumed their opening round after play was suspended late Thursday due to a powerful storm. The second round ended with the bulk of the field still trying to solve the speedy and sloping greens of the hilly William Flynn layout in the heart of Amish country.

Ultimately, the day belonged to Yang.

Stacy Lewis, last year’s runner-up, and Japan’s Shiho Oyama were tied for second at 4-under 136.

Yang has had her share of success on the LPGA Tour, earning two victories since turning pro in 2006. But some of her finest golf has been played in the U.S. Open, where she has finished in the top 10 four times in the last five years.

She tied for fifth in 2010, shared 10th place the following year and placed second in 2012. Last year at Pinehurst No. 2, she was third after 36 holes and first after 54 before closing with a 74 and finishing fourth.

She was paired with eventual winner Michelle Wie in the final round at Pinehurst and believes that experience can only help over the final two rounds.

“It’s better to have that experience than never experience that before,” Yang said. “It’s different out there and I know what kind of pressure that is like. It will be tough, but I will be patient and work on it.”

Lewis birdied four of eight holes in the middle of her round, but bogeyed her last and settled for a 3-under 67.

Lewis’ patience was tested early in the first round as she struggled with four bogeys and two birdies before breaking out of her funk. That carried over into the second round and she went on a tear that propelled her near the top of the leaderboard – again – in the biggest event in women’s golf.

“I just started playing golf, is really what it was,” Lewis said, “I was thinking a lot those first 10, 11 holes, thinking a lot about my golf swing and just not playing. So I got to just playing golf … and it’s what you’re seeing in the scores.”

The 38-year-old Oyama had an opening 70 and was 2 over early in her second round before shooting up the leaderboard. She made six birdies in a 12-hole stretch, including four on her second nine on the way to a 4-under 66.

She has a total of nine victories in Japan. She played in the 2007 and 2009 U.S. Opens, but said surgery kept her from playing golf for a year. She’s thrilled to be back in the championship.

Marina Alex, part of a three-way tie for the lead after one round, carded a 1-over 71 and was in fourth place at 3-under 137.

Inbee Park and Jane Park were among the players forced to finish their first rounds early Friday.

Jane Park, the 2004 U.S. Women’s Amateur champion, used a birdie and four pars to earn a share of the lead after one round.

“It wasn’t exactly a day where I could be very aggressive with my putts because the pin placements were very difficult,” she said.

Inbee Park, a two-time U.S. Open winner with titles in 2008 and 2013, played 22 holes Friday. She said her patience was tested by her poor putting.

“I hit probably every putt short, I missed it short,” she said. “It’s hard to think that you have to smash the putts at a U.S. Open. That’s where putts are, really, really slow. It’s a little bit disappointing. “

Wie rebounded from an opening 72 with a 2-under 68 and was seven shots off the lead.

Team Canada Young Pro Brooke Henderson signed for a round of 73 today and sits T44 heading into the weekend. Christina Foster missed the cut after a round of 82 to follow a round of 71 yesterday.