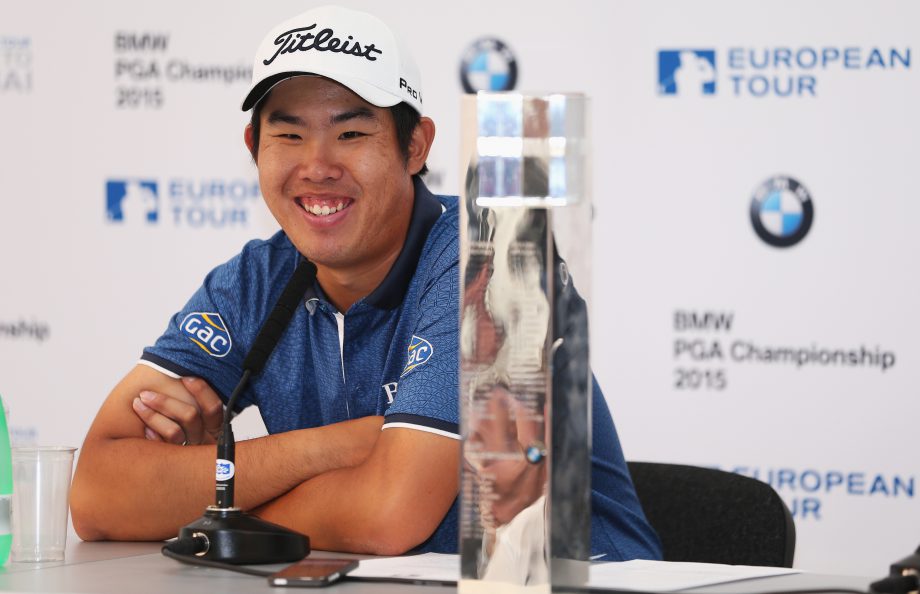 VIRGINIA WATER, England – Byeong Hun An shot a 7-under 65 to win the BMW PGA Championship at Wentworth on Sunday with a tournament record total of 21 under.

The South Korean made five birdies and an eagle in a bogey-free round to finish six strokes clear of Thongchai Jaidee of Thailand (69) and Miguel Angel Jimenez of Spain (67).

The 23-year-old An captured his first European Tour victory after Francesco Molinari, who had at least a share of the lead for the first three rounds, only managed a 74. He finished fifth, nine shots back.

“I was really nervous the whole day,” An said. “I had not even played this course until Monday … My iron shots helped me this week, I hit a lot of greens and did not miss many putts.”

The victory comes in his first appearance at Wentworth and also secures him a place at the U.S. Open.

An never showed signs of his nerves in an assured performance on the final day.

He started with birdies on Nos. 2 and 4, where he sent a magnificent bunker shot to within two feet of the flag, before accelerating away from the field with some composed iron play and clinical putting on the back nine.

His third birdie came on No. 11 before he was close to an albatross on No. 12. His approach from 193 yards with a 5-iron nestled inches away from the hole.

An duly tapped in for eagle, and his three-shot advantage grew to four when Jaidee bogeyed the 13th. He sealed his record victory with two more birdies on Nos. 15 and 17.

“It was 15, that birdie, where I thought with three holes to go, that my lead would do it,” An said. “Before then, I never thought about winning it. I tried not to look at the leaderboard but it was not easy.”

Molinari, a three-time European Tour winner, made five bogeys and a double-bogey on No. 16, where the Italian teed off into a fairway bunker before three-putting on the green.

England’s Chris Wood finished fourth after a 6-under 66 took him to 13-under 275 for the tournament. His round included a hole-in-one at No. 14, the fifth of the tournament.