Brooke Henderson one stroke back at Portland Classic 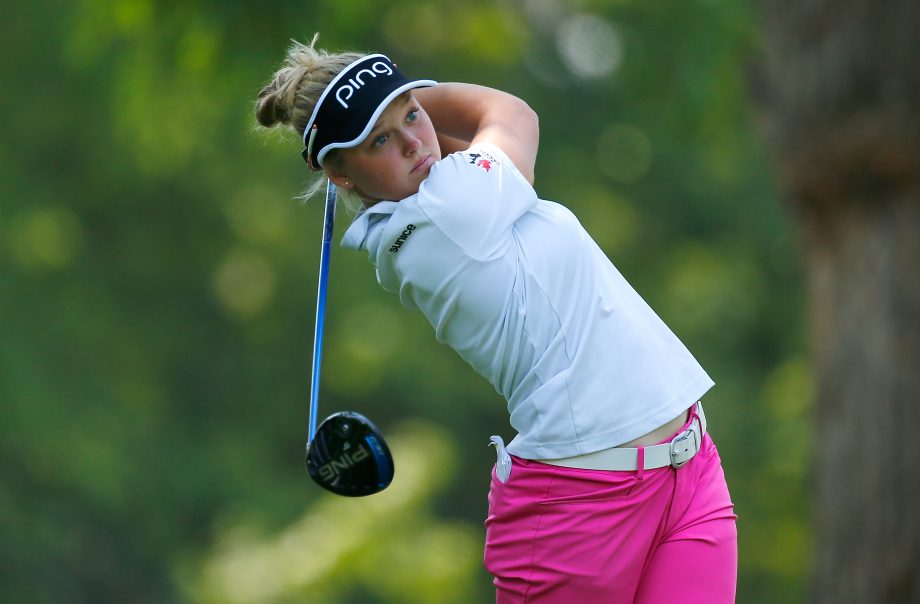 PORTLAND, Ore. – After the opening round Canadian teen star Brooke Henderson is a shot back of the lead along with Alison Lee and Julieta Granada.

The 17-year-old Henderson birdied six of the first 13 holes. The Canadian, who doesn’t turn 18 until September, has made $466,818 in nine LPGA Tour tournaments this year. Henderson earned a spot in the field in Monday qualifying, and thought that helped Thursday.

“I feel much more comfortable in the first round than I do a lot of times because I’ve already played this golf course in a competitive atmosphere this week,” Henderson said.

Anderson and Sandra Changkija shared the first-round lead at 7-under 65 on Thursday in the Cambia Portland Classic.

Amy Anderson set an NCAA record with 20 tournament victories during her college career at North Dakota State. Now she’s seeking a breakthrough victory in her second year on the LPGA Tour.

In warm, calm afternoon conditions, the 23-year-old Anderson had five consecutive birdies on the front nine in her bogey-free round at Columbia Edgewater.

“This is a good learning experience, and I’m kind of excited to learn from it and just see what it’s like out here,” Anderson said. “You have to learn at every single level, so for me it started at local tournaments, then to national amateur tournaments, collegiate … but this is a whole other ballgame.”

Anderson had never led a round during her two-year LPGA Tour career. She’s coming off her best finish of the year, a tie for eighth in Michigan in the Meijer LPGA Classic.

Changkija, playing in the morning, made six birdies on her opening nine and reached 8 under before finishing with a bogey. The 26-year-old Changkija, in her fourth LPGA season, has only two career top-10 finishes, but one came at the 2013 Portland stop. The 65 was her lowest competitive round since shooting 63 in Canada in the 2012 Manulife Financial Classic.

Changkija has rarely been near the lead during her professional career, but said her mindset won’t change Friday.

“I’m just going to do the same thing I did today – hit fairways, hit greens and just roll some putts,” Changkija said. “I’ve been hitting it really well. I just wasn’t making putts. I switched putters this week. I went to a Cure putter. It seems to be working well for me.”

One stroke back of third place with a round of 67 is Canadian Alena Sharp sitting T6. Jennifer Kirby posted a round of 70. Brittany Henderson signed for a round of 74, while Sue Kim shot 75.

Suzann Pettersen, the Portland winner in 2011 and 2013, started her round with a double bogey and shot 75.

The Portland Classic is the penultimate tournament before the U.S. Solheim Cup team is set.

The top eight players in the Solheim Cup standings, the top two in the world ranking not among the top eight in the standings, and two captain’s picks will make up the 12-player team for the Sept. 18-20 matches against Europe in Germany. Six players have clinched spots in the standings. No. 7 Angela Stanford shot 74, and No. 8 Gerina Piller had a 72.

Many players are wearing pins and ribbons honoring LPGA pioneer Louise Suggs, who died Friday at 91. Suggs, an 11-time major winner, was an LPGA founding member in 1950.