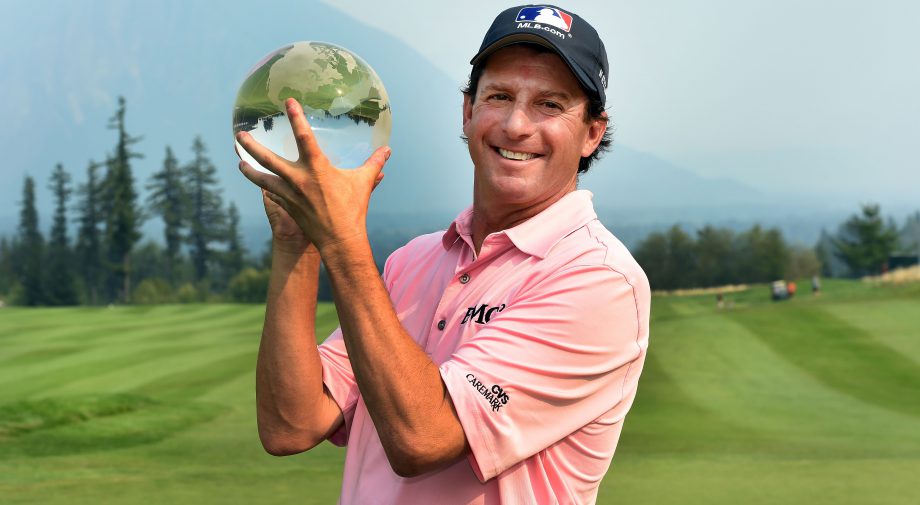 Billy Andrade poses with the trophy after winning the Boeing Classic on August 23, 2015 in Snoqualmie, Washington. (Steve Dykes/Getty Images)

SNOQUALMIE, Wash. – Billy Andrade won the Boeing Classic on Sunday for his second Champions Tour victory and first in an individual event, overcoming trouble early in the final round for a one-stroke victory.

Andrade closed with a 1-over 73 to finish at 9-under 207 at TPC Snoqualmie Ridge. He opened with rounds of 69 and 65 to take a three-stroke lead into the final round.

The 51-year-old Andrade teamed with Joe Duran to win the Legends of Golf in April for his first Champions Tour title. Andrade won four times on the PGA Tour.

Andrade’s 73 was the highest final-round score by a tour winner since Roger Chapman had a 1-over 71 in the 2012 Senior PGA Championship.

Andrade was at 11 under until he got to the fourth where he made triple bogey on the par 4. Andrade’s tee shot went out of bounds, he later needed to take a drop out of the woods and chipped in from off the green to make seven.

Andrade had a bogey on the seventh hole and fell into a tie for the lead, but birdies at Nos. 8 and 12 gave him a three-shot lead and he parred the final six holes to hang on.

Langer started the day in second place, but went 15 holes between birdies before dropping a short putt at the 17th to get back to 7 under. He reached the par-5 18th in two, but his eagle putt slid past the hole and Andrade two-putted to complete the victory. Langer finished in the top three for his fifth straight event and his third straight second place finish.

Couples, the hometown favorite, moved into contention after making eagle on the par 5 eighth, but bogeyed the 11th after his tee shot found the thick rough left of the fairway. He recovered with birdies on Nos. 13 and 14 to reach 6 under but missed a short birdie putt at the 15th and bogeyed the 17th. Couples and O’Meara both eagled the 18th to finish at 7 under.