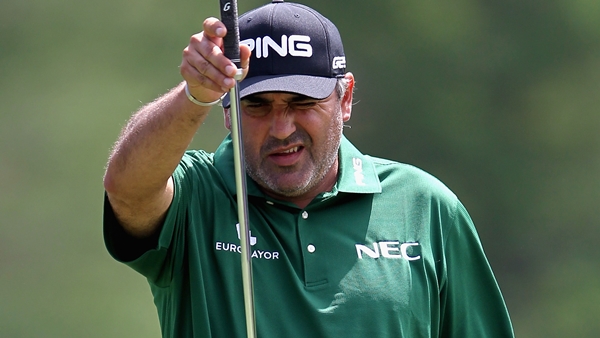 CHARLOTTE, N.C. – Phil Mickelson was entertaining to the very end Thursday and finished one shot behind Angel Cabrera in the first round of the Wells Fargo Championship.

Cabrera played in early, calmer conditions and thrived on the new Bermuda greens at Quail Hollow. He made seven birdies, including a 40-footer from just off the green, and turned in a 6-under 66 that stood as the lead the rest of the day.

Mickelson caught him twice and couldn’t hold it.

Coming off his first missed cut at the Masters in 17 years, Mickelson handled the strong, swirling wind in the afternoon for a 5-under 67, tied with Martin Flores. Mickelson hit only one fairway on the back nine. He bogeyed both the par 3s. He chipped poorly and atoned for that with long par putts.

And he wound up with the start he wanted at a tournament he badly wants to win.

“It was important for me to get off to a good start today because I haven’t played as well as I would like to this year, and I haven’t been getting off to great starts,” Mickelson said. “So I’m always playing from behind. And it feels great to get off to a quick start where I don’t have to feel like I’m playing catch-up.”

Webb Simpson, the former U.S. Open champion and a member at Quail Hollow, might have joined Cabrera except for the way he finished each nine. He took double bogey on No. 9 when he hit into the trees and three-putted, and made bogey on No. 18 with another wayward tee shot. Other than that, his card was filled with seven birdies for a 68.

Stewart Cink and Jonathan Byrd also were at 68.

Rory McIlroy also had a few patches of wild play – a tee shot down the side of the hill toward the water on No. 16, another that hit a tree and bounced so far left that Boy Wonder thought about playing a shot down a service road behind the corporate tents. Wiser heads prevailed – his caddie’s, in this case – and he limited the damage to bogey.

He still made six birdies and was in the large group at 69 that included U.S. Open champion Justin Rose and Martin Kaymer, who played his final four holes in 2-under par despite not making a birdie or a par. Kaymer went bogey-eagle-eagle-bogey.

“Two eagles in a row, pretty rare. I don’t think I’ve ever done that before,” Kaymer said. “I missed a lot of short putts today as well, so therefore, 3-under par is OK.”

Cabrera’s round was not nearly that dramatic. He made a couple of long putts, most of the birdie chances one would expect to make and hit it close enough times to post his lowest score of the year, and only his fourth round this year in the 60s.

“It was a very good first round, and we have a lot to go,” the Argentine said through a translator.

Even though he struggled to hit fairways, this wouldn’t classify as a wild round by Mickelson’s standards. But there was rarely a dull moment.

From the trees on the par-5 10th, he escaped with a strong shot just short of the green, only to hit his chip too hard and nearly roll off the green. He holed that from 10 feet for birdie. From the pine straw left of the 11th fairway, he hit a low bullet in good shape just short of the green, only to catch his chip too heavy and leave himself 25 feet short. He made that one for par. And he caught Cabrera at 6 under for the first time with another shot from the pine straw to 4 feet.

But then, Mickelson hit another chip too hard and failed to save par from 15 feet. He tied for the lead again with a solid pitch to 2 feet for birdie on the par-5 15th.

The final three holes were symbolic of the grind.

He rammed a 30-foot birdie attempt some 6 feet past the hole and made that for par. He left a 45-foot birdie putt about 5 feet short and missed that for a three-putt bogey on the 17th. And made a remarkable recovery from a tough lie in a bunker on the 18th.

Being left-handed, his feet were up the slope of a bunker and the ball was well below his feet. Mickelson hit 6-iron from 210 yards and caught it so perfectly that it rolled up the hill and onto the collar of the green just over 40 feet away.

And then he blasted the putt 10 feet past the hole – and made that with a sigh of relief, a par and a good start going into a morning tee time Friday.

“I made a lot of really good putts today, and it covered up some very poor chips – a number of poor chips 15, 20 feet from the hole that should be tap-ins,” Mickelson said. “Ended up making three out of the four, so it covered up a lot of mistakes.”

Leading the Canadians is David Hearn, who opened with a 2-under 70 to sit tied for 16th.

Stephen Ames and Mike Weir are two back of Hearn after shooting matching 70’s.

Brad Fritsch struggled to a 79 and withdrew. After his round, he tweeted…

WD’d today for personal reasons. Thanks to all who asked and showed concern. Trying to move ahead and look forward to the Byron Nelson.