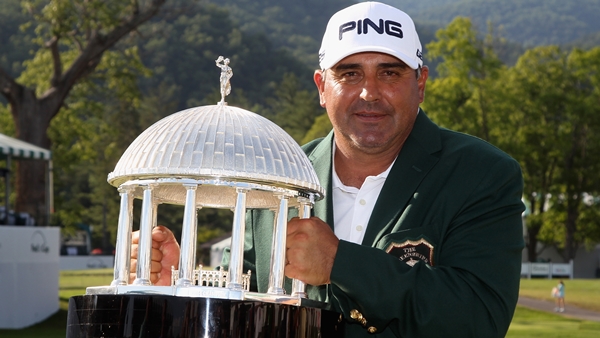 WHITE SULPHUR SPRINGS, W.Va. – Angel Cabrera won the Greenbrier Classic on Sunday for his first non-major victory on the PGA Tour, closing with his second straight 6-under 64 for a two-stroke victory over George McNeill.

Cabrera, the 44-year-old Argentine whose only other PGA Tour victories came in the 2007 U.S. Open and 2009 Masters, built a three-shot lead before making things interesting with a pair of late bogeys. He finished at 16-under 264.

McNeill shot a season-best 61 for his fourth top-10 of the season and first since mid-March.

Webb Simpson had a 63 to finish third at 10 under.

Third-round leader Billy Hurley III bogeyed four of the first six holes to fall out of contention. He shot 73 and finished in a seven-way tie for fourth at 9 under.

No third-round leader has hung on to win the Greenbrier Classic in its five-year existence.

McNeill was the clubhouse leader at 14 under well ahead of Cabrera, who still had the back nine to play.

Cabrera had no top 10-finishes this season entering the tournament, but had everything working Sunday, hammering drives and approach shots with precision and coming up with clutch putts, especially on the back nine.

Cabrera overtook McNeill with birdie putts of 17 and 7 feet on the 11th and 12th holes, then gave a fist pump after moving to 17 under by holing a 176-yard 8-iron up the hill for eagle on the par-4 13th, the hardest hole at Old White TPC.

By then his lead was three strokes, but he bogeyed the 14th after his approach shot spun off the front of the green and bogeyed the par-3 15th after hitting into the rough on his tee shot.

Cabrera won $1.2 million and is projected to improve from 158th to 54th in the FedEx Cup standings. McNeill would move from 60th to 29th.

The leading four players among the top 12 not already exempt for the British Open earned spots in the July 17-20 tournament at Royal Liverpool. Those spots went to McNeill, Stroud, Tringale and Hurley.

Cauley’s final shot of the day was a hole-in-one on the 18th, which triggered a $100 prize from the tournament to paying customers in the stands. But Cauley missed out this week on a British Open nod, whose qualifying tiebreaker uses the world ranking. Cauley entered the week at No. 295. Another spot will be handed out next weekend at the John Deere Classic.