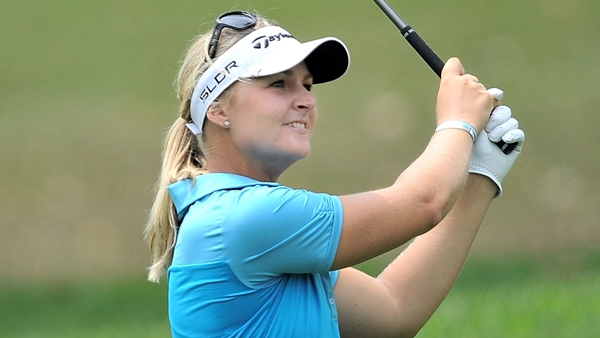 Playing under overcast skies, the 26-year-old who is based in Florida hit six birdies, two bogeys and an eagle on the 15th to take a solo lead at 6 under par in the 70-player tournament.

“I started with three birdies, so obviously got some momentum off the start,” Nordqvist said.

“On 15 I had 59 yards to the pin, pitched a little bit past, and then spun in the hole. So that was pretty cool to make an eagle there.”

After barely registering a top-10 finish, late last year Nordqvist had to find a new coach, Jorje Parada of Spain, and changed equipment.

“It felt like at one point last year I was about ready to quit golf,” added the world No 27. “I just kind of lost the reason why I play golf, the fun of it. I have good people around me now. They have been really helping me to get that inspiration back.”

Wie fired six birdies, while bogeying the third, for a 67.

“I birdied all four of the par 5s today, which definitely helps on this golf course,” she said.

Three more Americans are a stroke further back on 68 – Lexi Thompson, Jennifer Johnson and Angela Stanford, whose round was aided by a hole in one on the par 3, 146-yard eighth hole.

World No 1 and defending champion Inbee Park of Sputh Korea hit a 71 to join a large group of players on one-under that also includes world No 3 Stacy Lewis, 2012 LPGA Championship winner Feng Shanshan of China and Australian Karrie Webb, who just claimed a home tournament in Victoria on Sunday.