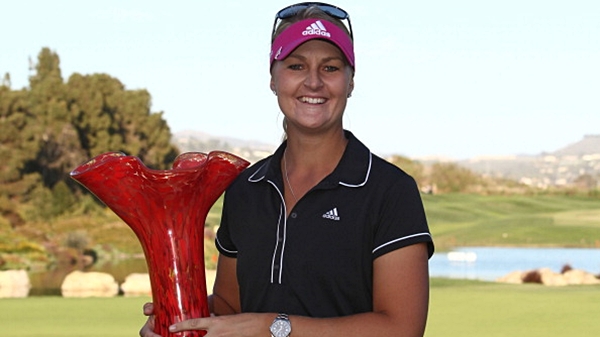 CARLSBAD, Calif. – Anna Nordqvist rallied to win the Kia Classic on Sunday at Aviara for her second victory in her last four LPGA Tour starts.

Two strokes behind leaders Cristie Kerr and Lizette Salas entering the round, Nordqvist closed with her second straight 5-under 67 for a one-stroke victory over Salas.

“I’m very excited. I still can’t believe it,” Nordqvist said. “I was a couple of shots back going into today, but this morning I told myself to give it a shot and I ended up making quite of bit of birdies out there. I’m very excited to have two wins this season.”

“My hands were shaking a little, I’m not going to lie,” Nordqvist said. “You never know with the sun setting you see every little spike mark. So I tried not to focus on that and see the hole.”

The Kraft Nabisco, the first major tournament of the year, is next week in Rancho Mirage.

“I really love the majors,” Nordqvist said. “It’s a tougher set up on course and I feel more pressure, more spotlight on the tournament and I like that. I like the test and it seems like it is going to be pretty windy next week which will make it tougher. I’m very happy with the way I’m playing and can’t wait to tee it up.”

“I’m going to put this in the back of my mind, but know I can make putts down the stretch,” Salas said.

The former Southern California player is winless on the LPGA Tour.

“Obviously, I can’t control what Anna does,” she said. “She’s been playing awesome this year and already had a win, congrats to her. That’s just golf. Sometimes things go your way and sometimes they don’t. Luckily, I finished with a birdie on a good note, and off to the Kraft.'”`

Nordqvist changed equipment and started working with instructor Jorje Parada during the offseason after considering leaving the tour.

The former Arizona State player made a short birdie putt on the par-4 first hole and added birdies on the par-5 eighth and par-4 ninth to make the turn at 11 under. She also birdied the par-4 13th, par-3 14th and par-4 16th before dropping a stroke on the par-5 17th.

Lexi Thompson was third at 11 under after a 68, and Chella Choi was another stroke back after a 69. Kerr closed with a 73 to finish fifth at 9 under.

Laura Diaz had a hole-in-one for the second straight day to become the second player in LPGA Tour history to make two aces in a tournament.

Jenny Lidback is the only other player with two aces in an event, accomplishing the feat in the 1997 Tournament of Champions.

“I was trying to hit it a little left to right high and take a little bit off of it,” Diaz said. “And, yeah, I did it. It went in.”

On the eagle on No. 7, she holed out from 122 yards with a 50-degree wedge, the club she used to hole out twice Saturday. She’s the first tour player to follow an ace with an eagle on the next hole

Toronto’s Rebecca Lee-Bentham finished at 3-over 291 and tied for 61st.