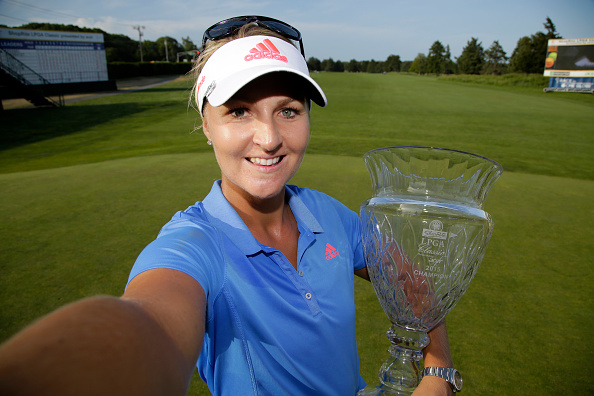 The 27-year-old Nordqvist birdied the 16th and 17th holes to break out of the pack and win the ShopRite LPGA Classic by a stroke. She closed with a 2-under 69 in windy conditions to finish at 8-under 205 at Stockton Seaview’s Bay Course.

The former Arizona State player has five career LPGA Tour titles, winning twice each in 2009 and 2014. And none of those victories could have been any sweeter than Sunday’s, with mother Maria in the gallery.

“It’s the first time I’ve won on the LPGA Tour and one of my family members were there with me, so it’s definitely special,” Nordqvist said. “It’s Mother’s Day in Sweden, so I couldn’t have given her a better present than to spend the day with her.

A stroke behind leader Morgan Pressel entering the round, Nordqvist made her move on the closing three holes – a stretch she played in 5 under the first two days.

She sank a 12-foot birdie putt at the par-4 16th to break a tie with Christel Boeljon of the Netherlands and get to 8 under. Nordqvist hit her tee shot on the short par-3 17th to 8 feet to the left of the hole and drained that putt as well to move to two strokes in front.

“I thought I hit a lot of good putts” all day, Nordqvist said. “Just knowing that I hit good putts helped me. I hit a real good putt on 16 and even on 17 to give me a little bit of space there at the last. I felt like I played really well and I put myself in a position to win.”

With Boeljon, winless in five years on the LPGA Tour, missing an 18-inch birdie putt at the 18th while playing in the group ahead, Nordqvist was not hurt by a bogey at the last. She finished her round, played in steady afternoon wind, with five birdies and three bogeys.

After she putted out, she was sprayed with champagne by some fellow players, and then looked for her mother.

“I tried to find her but it was quite a bit of people,” she said. “I saw her after 17 after I just made two straight birdies. And then on 18 I had a short putt to win and just in my line I saw my mom.”

Boeljon, who played for Purdue and was the second in the 2007 NCAA tournament, was a career-best second after a 68. Pressel, who fell out of the lead following a bogey-double bogey stretch on the front nine, tied for third at 5 under after a 73. Rookie Kelly Shon got within one stroke of the lead, but a tough finish dropped her to a 70 and a tie with Pressel.

Nordqvist picked up her first birdie of the day at the par-4 fourth with a 5-foot putt. She moved into a tie for first after Pressel bogeyed the sixth hole and lost the lead to Boeljon after she missed the eighth green and made bogey.

Nordqvist picked up two shots with birdies at the par-5 ninth and short par-4 10th, draining putts of 8 and 6 feet. She dropped back into a tie for first after a three-putt bogey on the difficult par-3 15th but surged into the lead for good with her birdie at 16.

Pressel, who birdied the par-5 third, ran into her worst stretch of the weekend at the sixth and seventh holes. After her approach at No. 6 ran into the collar, she chunked her chip shot and made bogey. Then at the par-3 seventh, she came up well short with her tee ball, hit a bad pitch and three-putted.

The three lost shots dropped her from 8 under to 5 under, trailing by two, and she never held as much of a share of the lead the rest of the day in her bid for her first LPGA Tour win since 2008.

“I just didn’t make anything today,” Pressel said. “I didn’t hit it quite as well. I certainly made a mess of 6 and 7 and got behind the 8-ball early, and these greens are just a little bit too bumpy to make a ton of putts out here, even with good strokes.

“I just had way too many putts and you’re not going to win a tournament hitting 2 over on Sunday.”

Team Canada’s Brooke Henderson of Smiths, Falls, Ont., tied for 23rd at 1 under after a final round 67.

Alena Sharp finished 2 over after a final round 72. The Hamilton, Ont., native tied for 51st.