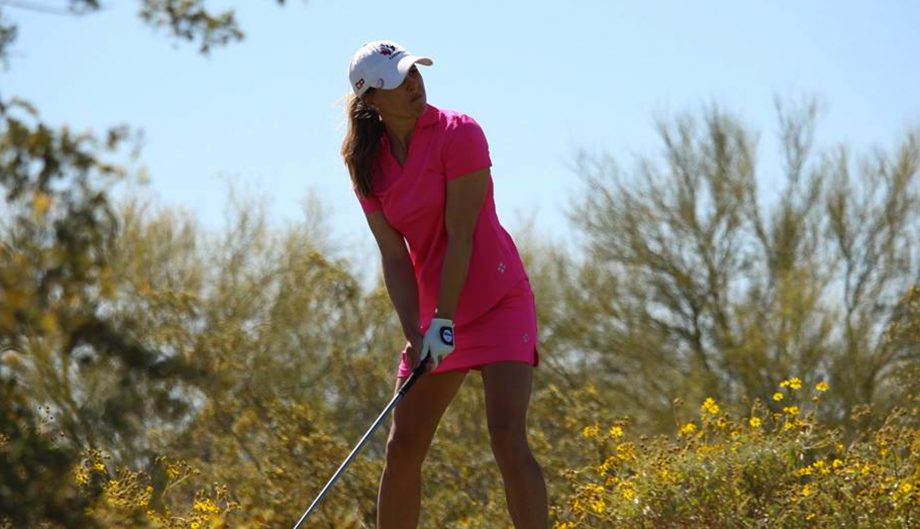 MESA, ARIZONA, March 30, 2017 – Anne-Catherine Tanguay (Quebec, Canada) continued her stellar start to the 2017 season with a 6-under, 66 to lead after day one of the Gateway Classic at Longbow Golf Club. Tanguay, a Team Canada Young Pro Squad member, made five birdies and an eagle to shoot her low round of the season. Former UCLA All-American Stephanie Kono (Honolulu, Hawaii) is one back at 5-under, 67. There are five players two off the lead including Chandler, Ariz. native Kyung Kim, who was the 2010 Arizona High School Player of the Year.

There are ten players within three shots of the lead.

Tanguay, who ranks third on the Volvik Race for the Card money list with two top 10 finishes to start the season, has posted seven straight under-par rounds.

“It was a good day, I got the putter rolling,” said Tanguay, who needed just 27 putts. “I had a really good par save on 12 and that really keep me rolling and then the eagle on 15. As the round went on, I kept hitting it closer and closer. Being in good position off the tee gave me good chances from the fairway and I think the pins were pretty accessible today.”

“I just had a downhill lie so I hit a bullet down towards the flag and it was a great shot and it fed to the green,” explained Tanguay. “I drained a 25-footer and just gave myself chances.”

Tanguay felt her putter was a tad light during practice for the IOA Championship last week. So, she found a Golf  Galaxy an hour from Beaumont and drove mid-week to pick up lead tape to add weight to the bottom of her putter.

“My putter is now 10 grams heavier and since then it has been rolling really good.”

In seven rounds this year on the Symetra Tour, Tanguay is 19-under with no over-par rounds.

“These are the best seven consecutive rounds that I’ve had because of how consistent they are,” explained Tanguay. “I’m just really happy with where my game is at right now.”

“It’s great to be back and I really like to play golf courses again to test my game,” said Tanguay. “Arizona golf is great. I had a lot of wedges in and a lot of opportunities. The greens are rolling really, really pure and it was a fun day overall.”

Meanwhile, Kono made three birdies on her front nine and two on the back. She did not have a blemish on her scorecard.

chances,” explained Kono, who made birdies on both nine and 18. “I started off hitting the ball really well. It felt like I could go even lower, but 5-under isn’t too bad.”

“I have some good memories here and I like playing desert golf,” said the former UCLA Bruins golfer. “I like seeing the ball go far and the greens are a little easier to read.”

“The Trackman gives me certain numbers and I try to hit them to work out distance control,” explained Kono. “It has really helped my wedge game and keeps me consistent.”

Kono has conditional LPGA Tour status and expects to bounce back-and-forth between the two tours. She made 14 starts on the LPGA in 2016.

“Even last week when I missed the cut, I was hitting it well but I couldn’t get some putts to fall and today they fell,” explained Sepmoree. “My caddy and I have worked really hard on the greens to get the speed down and get comfortable over it (ball) and it showed up today.”

Sepmoree made eight birdies including a stretch on the back nine when she dropped four in a row between 11 and 14.

“It’s a mindset that I have to get in to get the ball to the hole,” said Sepmoree, who classified herself as a “die putter” where the ball slowly drops into the hole rather then speeding right in. “I just have to be more aggressive.”

Sepmoree is now in her fourth year on the Symetra Tour and hopes that her comfort leads her to the LPGA.

“It’s all about confidence,” said Sepmoree. “There is nothing that surprises me anymore, I know the ropes. With everything I’ve done in my life, it has taken baby steps and I just need to keep taking them and I’ll get there (LPGA).”

Sepmoree said that while she’d love to be on the LPGA, she’s not surprised by the slow climb. It took her “awhile” in college to settle down and play well.

Sepmoree celebrated her birthday by going on a 14-mile hike in Beaumont on Sunday. With so many hiking trails in greater Phoenix, she is considering going on another this week.

“I met the coolest people,” said Sepmoree. “I’ve always loved the military and I’ve always said that if I wasn’t playing golf that I’d consider joining myself. If I don’t join the military, I want to give back some way and golf is a great outlet for them. I still have guys I met at Kirtland Air Force Base (New Mexico) that say ‘come back, come back, I want to play with you’ and that makes it totally worth it.”

RICHDALE CONTINUES HOT PLAY; CLOSING IN ON CAREER MONEY LIST: Samantha Richdale (Kelowna, Canada) turned in one of the better afternoon rounds, a 4-under, 68. Richdale made six birdies on the day.

Richdale registered her 29th career top 10 finish to open the season at the Florida’s Natural Charity Classic. She ranks 14th on the Volvik Race for the Card money list through two events.

Richdale could become the all-time career money leader in Symetra Tour history this week. She has earned $225,618 over 134 starts, only $504 short of all-time money earner Lori Atsedes.

KEMPTER POSTS A 68 ON HER 30TH BIRTHDAY: Katie Kempter (Albuquerque, N.M.) got up-and-down from the greenside bunker on the ninth hole for birdie to post a 4-under, 68 late in the day when the wind was really blowing.

“It was hard in the afternoon, the course got firm and fast,” said Kempter. “The wind made me focus a little more which was good for me. I’ve been struggling with my ball striking so this was really good for me.”

Kempter’s dad was on the bag and her mom is in town for her 30th birthday.

“Since I found out we’d be playing on my birthday, I was joking that I’d shoot a 62 since that would be my personal best,” joked Kempter. “I would have had to stop after the 16th hole today, but it was a good day. I’m not a huge birthday person, but it’s nice to have a good score when everyone is wishing you a happy birthday.”

Kempter said she hasn’t seen her parents on her birthday in 12 years.

• A total of 31 players are under-par after day one.

• Former Arizona State star Giulia Molinaro opened with a 2-under, 70.