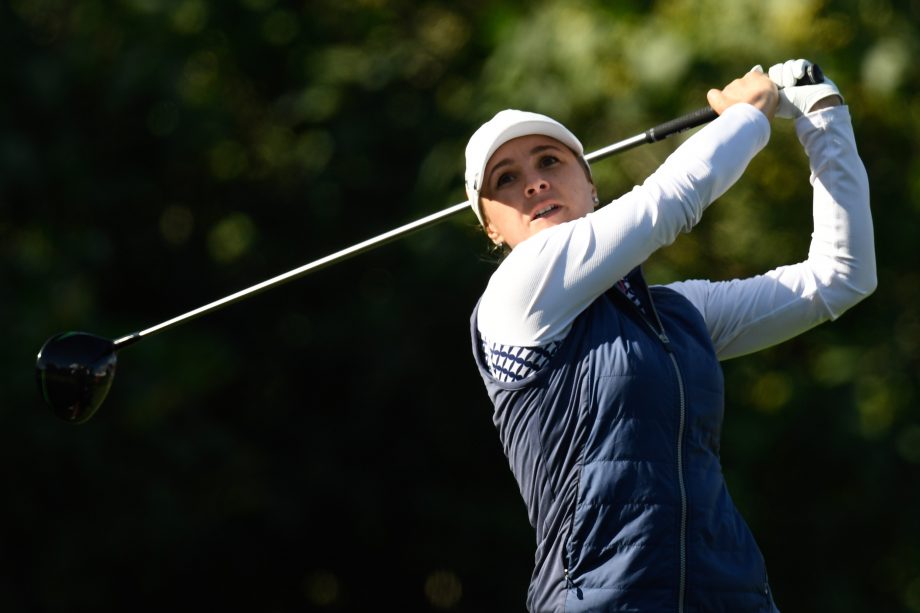 GARDEN CITY, Kansas, September 9, 2017 – Katelyn Dambaugh (North Charleston, S.C.) is currently reading a book entitled “Chasing the Lion”. On Saturday, she chased down the entire field with a 4-under, 68 in sustained winds of 22 miles-an-hour to grab the 36-hole lead at the Garden City Charity Classic at Buffalo Dunes. Dambaugh, who stands at 5-under, 139, will sleep on the lead for the first time in her short professional career.

Anne-Catherine Tanguay (Quebec, Canada), No. 8 on the Volvik Race for the Card money list, is one off the lead at 4-under, 140 after a 1-over, 73 on Saturday. August Kim (Saint Augustine, Florida) and Stephanie Na (Adelaide, Australia) are two back at 3-under. Dambaugh, Tanguay, Kim and Na will all go for their first career win on Sunday.

Dambaugh, 22, made six birdies and two bogeys to vault from a tie for 22nd to the lead. She was one of only four morning wave rounds under-par (Margarita Ramos, Lindsey Weaver and Caroline Inglis). Only six total players finished under-par with gusts peaking at 35 miles-an-hour. There are just 10 players under-par through 36.

“I took advantage of the par-5’s when I could, I tried to be aggressive when I had a wedge in my hand,” said Dambaugh, who made birdie on two of the four par-5’s. “I’m just trying to play really smart, especially on the downwind holes.”

Dambaugh felt like she stole a birdie on the par-3 8th, which was playing downwind. She hit a soft eight iron to 8-feet and made the putt. She nearly made birdie on nine to end her day.

“This is one of the best rounds I’ve played this year given the difficult conditions,” said Dambaugh, who has four top 10 finishes this season. “I had to stay focused and understand that everyone was going to make bogeys today, but I had to minimize them.”

Dambaugh said she developed a game plan early in the week knowing that wind was going to be a major factor.

“Depending on what direction the wind is going, I want to just let the wind take the ball,” said Dambaugh, who won the SEC individual title in 2017. “I also really wanted to hit a lot of fairways because then you have a pretty decent chance.”

Dambaugh plays out of Charleston (Bulls Bay Golf Club), which is near the water, so she has experience in the wind, but not quite to the ferocity of the wind speeds in Garden City.

She currently ranks 16th on the Volvik Race for the Card money list with $33,328 earned in just eight starts. The first-place payday of $22,500 could move her as high as No. 6. Dambaugh joined the Tour midway through the season after putting a ribbon on one of the greatest careers in South Carolina history.

Off the course, Dambaugh likes to read books that are motivational or have a religious undertone. She read Tim Tebow’s first book and is currently reading “Chase the Lion: If Your Dream Doesn’t Scare You, It’s Too Small” by Mark Batterson.

“It gives me a lot of determination,” said Dambaugh about the book. “It teaches me that there is going to be adversity, it is just how you deal with it.”

Dambaugh already has experience playing pressure-packed Sunday golf. Last week, she finished third at the Sioux Falls GreatLIFE Challenge. She is 6-under-par in final rounds over the last three weeks.

Tanguay, who has ten career top 10 finishes, would likely move to fifth with a win.