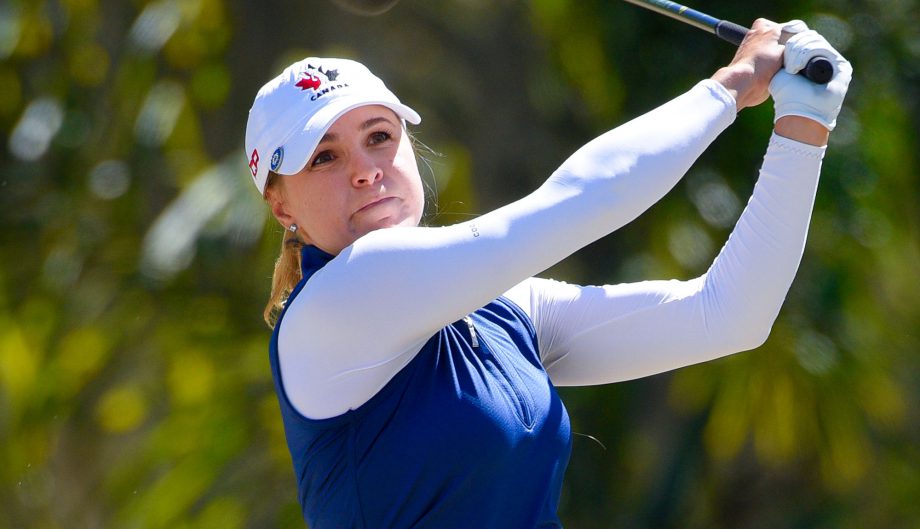 GARDEN CITY, Kansas, September 8, 2017 – Anne-Catherine Tanguay (Quebec, Canada) and Carlie Yadloczky (Casselberry, Florida) posted stellar rounds of 5-under, 67 in sustained winds of 18 miles-an-hour to share the 18-hole lead at the Garden City Charity Classic at Buffalo Dunes. Tanguay made one eagle on the day while Yadloczky made eagles on back-to-back holes. Wind was a major factor for much of the day with gusts reaching 23 miles-an-hour in the afternoon.

Six players share third place at 4-under, 68 including No. 4 on the Volvik Race for the Card money list Erynne Lee (Silverdale, Washington), No. 11 Kendall Dye (Edmond, Oklahoma) and No. 13 Sophia Popov (Heidelberg, Germany).

The first-place payout of $22,500 would go a long way in moving Tanguay, No. 8 on the money list, closer to securing her LPGA Tour card. She could move as high as fifth with a victory, which would be the first of her career.

“My ball striking was really, really solid,” said Tanguay, who made five birdies and an eagle on hole 13. “I gave myself a lot of chances to go at pins. I felt like I was at home in Norman, Oklahoma. I have to thank my coach Veronique Drouin-Luttrell for putting us through these conditions. It think it really pays off and I’m in my comfort zone here.”

Tanguay played college golf at the University of Oklahoma from 2010-2014 and posted 15 top 10 finishes. She also closed her career with the second lowest scoring average in school history.

“This was an above average windy day in Norman,” said Tanguay. “You can get out of practice in windy conditions and it has been awhile, but I stayed really focused all day and that helped me a lot.”

Tanguay hit 12 of 14 fairways and attempted only 25 putts.

“Everything was good today,” said Tanguay. “I hit it close enough to give myself a lot of birdie chances, some four-five footers for birdies, but you have to make those putts. My putter was rolling really nicely and I made a 25-footer for eagle on 13.”

In 2015, Tanguay finished in a tie for fourth in Garden City so she has good memories at Buffalo Dunes. She didn’t play last year.

“This course fits my game really well, but I’m a different player than I was two years ago so it is good to be able to test my game again,” said Tanguay. “I took some more aggressive lines and it is definitely good to know the greens.”

Tanguay started the year with five top 10 finishes in the first six events, but doesn’t have a top 10 since May. She was pleased to start strong this week.

“I feel like I’ve been playing well these last few months, but the results haven’t been there,” admitted Tanguay. “It is good for my confidence to shoot under-par and I’m really happy.”