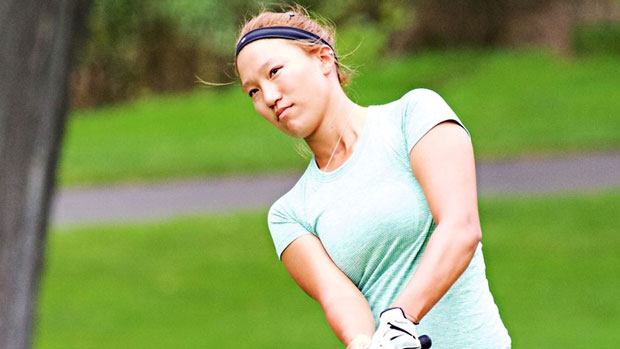 ROCHESTER, N.Y. – Annie Park (Levittown, N.Y.) said one of her favorite hobbies is sleep. She’ll need a good night’s rest tonight as she takes a 54-hole lead into the final round of her fourth event as a professional. Park carded a 3-under 69 and stands at 12-under 204, three strokes ahead of 2011 Solheim Cup member Vicky Hurst (Melbourne, Fla.). Park is the lone player in the field with three rounds in the 60’s.

“A good finish tomorrow would mean a lot, everything really is happening so fast like I said yesterday,” explained the 20-year-old Park. “I just need to focus on me and regardless of the results if I just try my best out there I think I’ll be happy.”

Park started strong with a birdie on the second and a birdie on the seventh to get to 11-under. She hit a bump in the road with back-to-back birdies on the eighth and ninth to make the turn at even par for the day.

“The first few holes, I missed some greens, but I made 10-foot par putts so I was like ‘thank god’,” said Park. “On the back nine, I started putting better and that was key to my round.”

Park rebounded immediately with birdies on the 10th and 11th holes. Her final birdie of the day came on the 15th hole. Putting has been key all week for Park, who has attempted 28 putts or less all three rounds.

Although she has been in the lead before, she said this position feels different.

“There are so many great golfers out here,” said Park, who won five times at USC including the 2013 NCAA individual title. “It is definitely different than college golf, but I am having a lot of fun out here.”

Park had a chance to sleep in this morning after play was delayed until 12:00 p.m. due to nearly three inches of rain overnight. Her original tee time of 11:43 a.m. was pushed back to 2:01 p.m.

“I don’t have any special meals or routine tonight, I just need to be able to sleep,” said Park. “I woke up at 10 today and saw my phone said flash flooding so I said ‘yes, I get to sleep more’ and then I got the email that play was delayed.”

Canadians Sara-Maude Juneau and Jessica Wallace both shot rounds of 70 today and are T7. Maude-Aimee Leblanc also signed for a round of 70 and currently holds the 18th spot. Natalie Gleadall fell to T22 with a round of 74. Brooke Henderson is T34 with a score of 73.