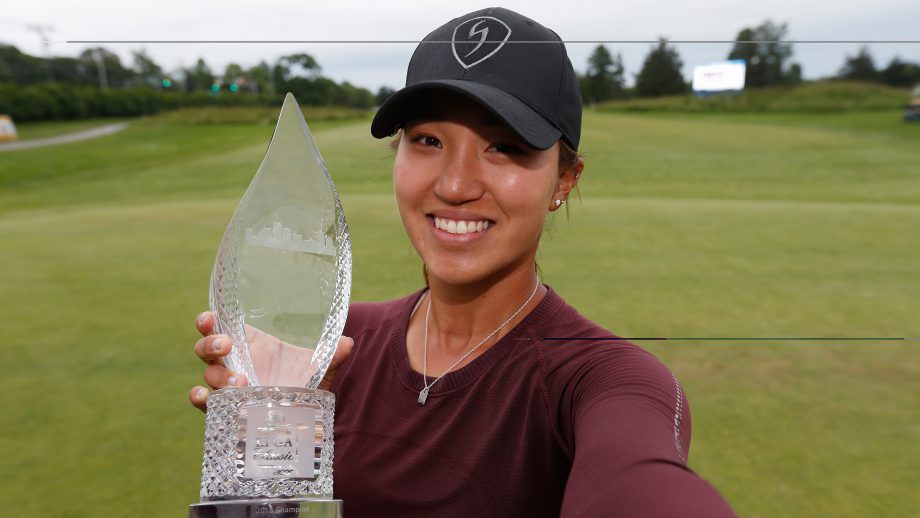 GALLOWAY, NJ - JUNE 10: Annie Park pretends to take a selfie with the trophy after winning the ShopRite LPGA Classic Presented by Acer on the Bay Course at Stockton Seaview Hotel and Golf Club on June 10, 2018 in Galloway, New Jersey. (Photo by Michael Cohen/Getty Images)
Associated Press

GALLOWAY, N.J.–Annie Park won the ShopRite LPGA Classic for her first LPGA Tour victory, closing with an 8-under 63 on Sunday for a one-stroke victory over Sakura Yokomine.

The 23-year-old Park, from Levittown, New York, had an eagle and six birdies on a cloudy day over the Bay Course at Stockton Seaview to complete 54 holes at 16-under 197, a stroke off the tournament record.

Yokomine, the winner of 23 events on the Japan LPGA Tour, flirted with a 59 but parred the par-5 18th for a 61 to tie the course record.

New Jersey native Marina Alex was third at 14 under after a 64. She made a hole-in-one at the par-3 17th. Sei Young Kim, who broke the course record Sunday morning when she finished her second round with back-to-back birdies for a 61, had a 70 to finish fourth at 13 under.

Park earned $262,500, topping her total of $261,096 for her first 49 LPGA Tour events. She won the 2013 NCAA individual title as a freshman at Southern California and helped the Trojans take the team crown.

Brooke Henderson had the best Canadian result, scoring 28th in a 69-round.  Anne-Catherine Tanguay finished eight places down, despite a score of 67.