Another stunning escape for McDowell at Match Play 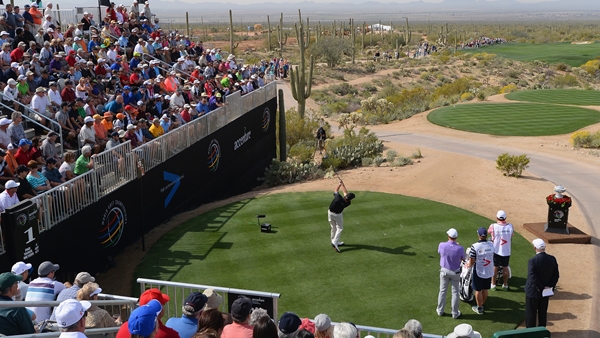 MARANA, Ariz. – The weekend arrives at the Match Play Championship along with the usual assortment of surprises.

Only this year, the surprise is not who.

Graeme McDowell has defied all logic at a fickle tournament that never had much of it in the first place. How else to explain how a player can go 58 holes without once having the lead while any of his rounds were in progress and yet still win all three matches?

“You might win one of those three matches,” McDowell said. “You don’t win all three of them. It just doesn’t happen.”

He was 3 down with three holes to play against Gary Woodland in the opening round and won the next four holes. He was 2 down with four holes to play against Hideki Matsuyama and won on the 18th hole. And on Friday, he was 2 down to Hunter Mahan and still managed to win. McDowell made a 10-foot slider for par on the 17th (Mahan missed from 8 feet on the same line), he birdied the 18th from 6 feet, made a 20-foot par putt on the 20th hole to extend the match and won in 21 holes with a birdie.

“Nine lives have been used up – and then some,” McDowell said.

And then there’s Ernie Els, the Big Easy who has had the toughest time at the Golf Club of Dove Mountain. Els has made nine birdies all week, which is one fewer than Jordan Spieth had in one round. Els is 5-over par for the week. Factoring the conceded putts, he has rounds of 75-73-73.

“Every match has been like that, you know?” Els said after a 1-up win over PGA champion Jason Dufner. “I’ve been playing a little ‘C’ golf and hanging in there. At the end, I’m hitting good shots when it counts.”

And ultimately, winning is all that counts.

Jason Day at No. 8 is the top seed remaining. Rickie Fowler at No. 53 is on the other end of the spectrum. The good news for Fowler is that winning three matches _ after coming into this event having missed the last three cuts _ assured he will move into the top 50 in the world and play the next World Golf Championship in two weeks at Doral. That one is stroke play, with a little more sanity.

Here is how the quarterfinals shape up for Saturday.

Day needed 40 holes to win his opening two matches. He had far less trouble against George Coetzee of South Africa, winning on the 17th hole. Next up for Day is Louis Oosthuizen, the South African with the dream swing. Oosthuizen is among the best in the world when he’s healthy and on his game, and he was both of those on Friday in a 5-and-4 win over Webb Simpson. It was the shortest match of the day.

Spieth, the 20-year-old whose future appears as bright as the noon sun in his native Texas, had 10 birdies on his card when he dispatched of defending champion Matt Kuchar. He rolled in a 10-footer on the last hole for a 2-and-1 victory. Now he faces Els, who won the first of his four majors less than a year after Spieth was born. Els has looked scrappy, but it’s amazing how much can change from one day to the next. Els will be trying to make the semifinals for the first time since 2001, when the Match Play was held in Australia.

Jim Furyk is the local favourite, having played college golf in Arizona. He had to work extra hard to take down Harris English. When it looked like Furyk would close it out on the 17th with a shot into 6 feet, English stuffed it to 6 feet and matched birdies. Furyk won on the 18th hole and now plays Fowler, a 1-up winner of Sergio Garcia.

This match featured the strangest development.

Garcia received a free drop because of bees around his ball on the sixth hole, a ruling that took forever. On the next hole, he felt it was unfair for Fowler to have to wait that long in match play. Garcia had 7 feet for par, Fowler had 18 feet for par. Garcia offered to halve the hole because he thought that was fair. Watch the video recap below.

Would he have done that in the Ryder Cup? Doubtful. But he felt good for himself, and he won the next hole.

Fowler won the next three holes, however, stayed in the match when Garcia missed short putts and took him out with a birdie on the 18th hole.

The final match Saturday is McDowell against Victor Dubuisson of France, who took down Bubba Watson, 1 up.

McDowell has never led in any of his three matches until he won them. Dubuisson has never trailed.