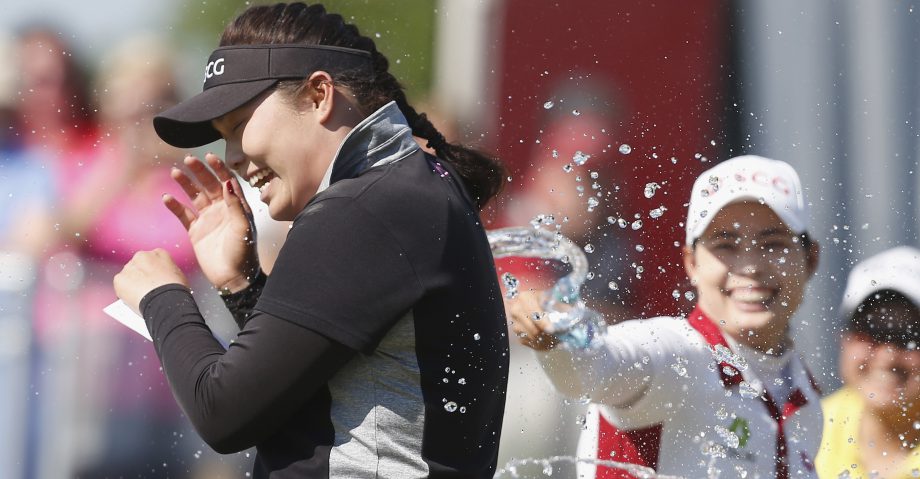 PRATTVILLE, Ala. – Ariya Jutanugarn was shaking over her final 5-foot putt, with personal, Thailand and LPGA Tour history on the line.

She made it anyway, becoming the first Thai winner in LPGA Tour history Sunday in the Yokohama Tire LPGA Classic.

“Last putt my hand shake, my leg shake,” Jutanugarn said. “I’ve had that before but I have not had it this bad before. My putter’s shaking, and I’m like, OK just go out from here.”

The 20-year-old Jutanugarn shot a 1-under 71 to beat Stacy Lewis, Amy Yang and Morgan Pressel by a stroke after losing two shots off her third-round lead. Her mom, Narumon, and sister Moriya, a tour player who tied for 63rd in the event, were on hand to celebrate on Mother’s Day.

Jutanugarn had four birdies and three bogeys a day after tying the tournament record with a 63, but didn’t repeat two previous failed attempts to keep a Sunday lead.

The long-hitter gave cheering fans a wave and smile as she approached the final green, chipping to 5 feet to set up a par putt. Jutanugarn finished at 14-under 273 on the Senator Course at Capitol Hill.

Lewis had her 10th runner-up finish in a 49-event drought. The 11-time tour winner has 23 career second-place finishes.

“This week helped a lot because I was able to see shots come off the way I wanted to,” Lewis said. “The way I got the ball up and down on the last hole. There’s so many good things that came out of this week and so excited to get playing again next week. We have a busy stretch coming up and it’s a good time to start to play some good golf.”

Hamilton’s Alena Sharp was the top Canadian, finishing the tournament tied for 22nd with a 5-under 283. Brooke Henderson, of Smiths Falls, Ont., was 4 under and tied for 29th while Samatha Richdale of Kelowna, B.C., was 1 under.

Jutanugarn two-putted from about 8 feet on 17, dropping a stroke from her lead with Lewis and Pressel on the final hole and Yang waiting and hoping to make a playoff.

Jutanugarn’s drive on the final hole went into the left rough and her second shot didn’t make the green but landed above the bunker.

There was plenty of drama but no ending collapse this time. Last month in the ANA Inspiration, she had a two-stroke lead with three holes left and closed with three bogeys to finish fourth _ two strokes behind winner Lydia Ko in the major championship. In the 2013 LPGA Thailand at age 17, Jutanugarn blew a two-stroke lead with a closing triple bogey in a one-stroke loss to Inbee Park.

She handled the pressure from an array of challengers better this time.

“This tournament was very different than ANA,” Jutanugarn said. “Because first hole of this tournament I’m very excited and very nervous because I (have a) three-shot lead, and ANA one shot behind.”

Pressel had drained a birdie putt on 18 to remain in contention, pumping her fist as the ball rolled toward the hole. Lewis saved par after planting her tee shot into the left rough, some 180 yards from the hole.

Caroline Hedwall was fifth at 12 under after a 68. The 19-year-old Minjee Lee, who won at Hawaii last month, was among four players three strokes back after a roller-coaster 72. She was 4 over through the first four holes, including a double bogey on the fourth _ and added another double on 17. She eagled the par-5 10th and had four birdies.

Yang started a string of four birdies on No. 2 and got another one on 8 before losing a stroke with a bogey.

Yang parred the final hole following a bogey-birdie-bogey stretch. She landed in the rough on 17 and then had to take a drop after sending her next shot into hip-high grass.

“I went for it (on 17), didn’t think left side, it was going to bounce to the left,” she said. “I just wanted to chip it right on the green, or short of it, but I hit it a little thin and went in the hazard but, you know, oh well.”