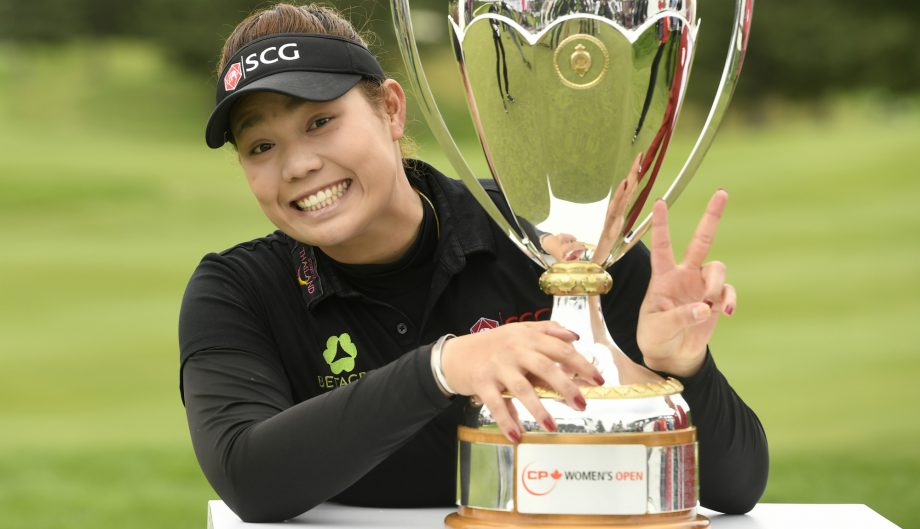 In any given profession, with success comes recognition.  And of course, the same applies in the sport of golf.

With that said, former world No. 1, Ariya Jutanugarn, from Bangkok, Thailand has certainly made her mark in Canada given her recent success on Canadian soil.

Last August after winning the 2016 Canadian Pacific Women’s Open by four strokes at the Priddis Greens Golf & Country Club in Calgary, Jutanugarn expressed how much she enjoyed playing in Canada and also spoke about how much she looked forward to coming back.

And she wasn’t kidding.

In early June, she returned to Canada for the Manulife LPGA Classic in Cambridge, Ont. – and the 21-year-old did it in style as she won the tournament in a dramatic three-way playoff.

In the final round at the Whistle Bear Golf Club, Jutanugarn shot a 3-under-par 69 to pull into a three way tie with Lexi Thompson of the United States and In Gee Chun of South Korea after 18 holes.

With both Thompson and Chun missing their birdie attempts on the first playoff hole, Jutanugarn calmly stepped up and sank a 25 foot putt to claim the victory; and also the distinction as the world No. 1 at the time.

The title at the Manulife LPGA Classic was Jutanugarn’s first of 2017; and in her post-victory press conference she spoke about the level of her game leading up to start of the tournament – which she felt was anything but perfect.

“I just can’t believe I won the tournament. I didn’t expect anything at all, because when I got here I didn’t feel comfortable with my swing. I (felt) like my tee shot (was) not that good,” she said candidly.

A couple days later at the Meijer LPGA Classic in Michigan, after having some time to soak in her accomplishment and reflect, Jutanugarn spoke about of the significance of reaching world No. 1 – specifically as it relates to the people in her native Thailand.

“I think they (are) really excited about that and I’m really happy to be representing Thailand and I’m very proud of myself that I can make them happy,” said Jutanugarn, who is the first male or female golfer from Thailand to have reached world No. 1.

New number one on Rolex Rankings is @jutanugarn the 10th in the rankings history @LPGA pic.twitter.com/K9YkF5h1EY

According to the 2017 Meijer LPGA Classic champion, Brooke Henderson, Jutanugarn’s success has a lot to do with her unique combination of power combined with her soft hands on the greens.

“Ariya is an amazing player and a very powerful player – she hits it a long way.  And she has an exceptional short game which is usually uncommon for that powerful of a player,” said the 19-year-old from Smith Falls, Ont. about Jutanugarn during a media day lead up to the Canadian Pacific Women’s Open.

Henderson adds that she is motivated by Jutanugarn’s success and also has aspirations of reaching the pinnacle of her profession one day.

“I think that’s everyone’s goal out on the LPGA Tour which is to be the best player they can be; and to be the top player amongst everybody,” said the former Canadian national team member, who climbed to world No. 2 last summer.

“Becoming number 1 is a tough thing to accomplish because there’s a lot of hard work involved and a lot of good breaks that need to go your way.”

Despite losing the world No. 1 ranking to So Yeon Ryu after South Korean’s victory at the Walmart NW Arkansas Championship, Jutanugarn still holds the distinction as the reigning champion for the only two Canadian events on the LPGA schedule.

#LPGAWinnerSelfie with Ariya @Jutanugarn @ManulifeClassic. There are no repeat winner selfies so far in 2017! pic.twitter.com/RE6WA5Ut35

However, that is something Henderson hopes to change when the CP Women’s Open tees off from Aug. 24-27 in her home golf course at the Ottawa Hunt & Golf Club.

The 19-year-old revealed recently at the media day for the CP Women’s Open that winning the title is one of the things on her bucket list.

With both Jutanugarn and Henderson currently playing their best golf, it bodes well for the potential of a budding rivalry between the two young stars over the summer and beyond.

While both share a healthy competitive spirit to be the best of the best in their profession, their success has also earned them recognition as role models and ambassadors of the sport.

Given that responsibility and honour, Jutanugarn was asked after her recent victory in Cambridge what her advice would be for the aspiring young golfers with the goal of reaching the pinnacle of the sport one day.

“Follow your dream and never give up,” replied the 21-year-old from Thailand. “That’s the key for me.”

Click here to buy tickets to see Jutanugarn, Henderson and the stars of the LPGA at the 2017 CP Women’s Open at Ottawa Hunt from August 21-27.