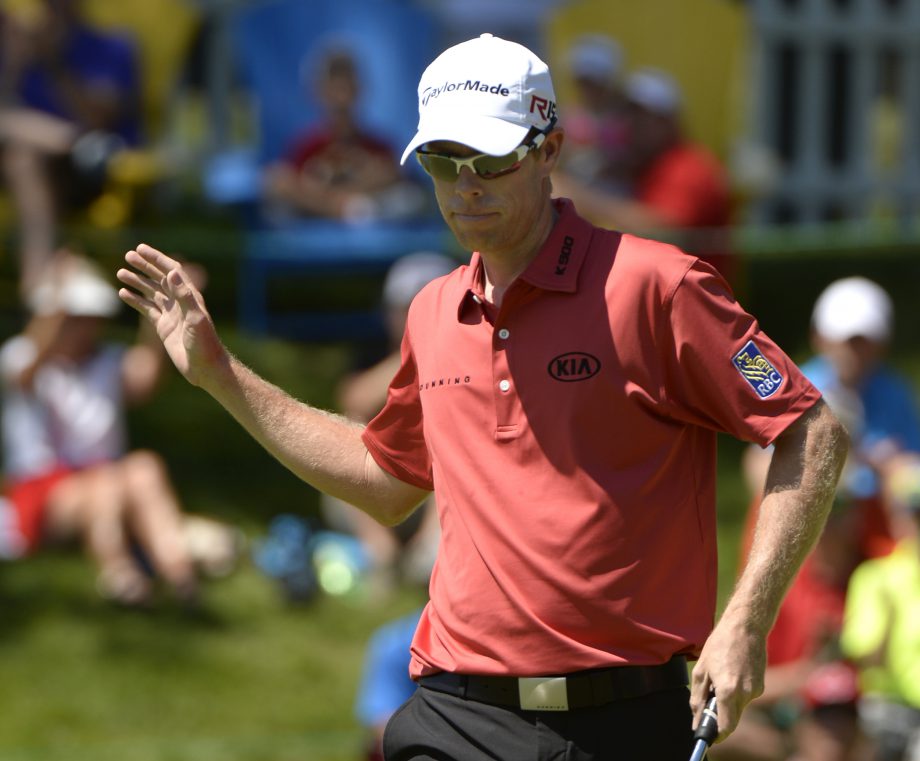 OAKVILLE, Ont. – David Hearn looked back from the 16th hole and knew fellow Canadian Graham DeLaet had withdrawn because his name wasn’t on the board anymore.

There’s no looking back now. While DeLaet is out with a thumb injury, Hearn celebrated “Red and White Day” at the RBC Canadian Open by shooting an 8-under 64 Friday to move to within three shots of leader Chad Campbell.

By getting to 11-under through two rounds, Hearn is in contention at the midway point and has a chance to be the first Canadian to win this tournament since Pat Fletcher in 1954.

“Today was a pretty awesome day,” Hearn said, decked out in red and white like many of the fans at Glen Abbey Golf Club. “I couldn’t be happier with where my game’s at and I’m excited about the weekend. If I keep doing what I’m doing, I feel good about my game.”

The Brantford, Ont., native is tied for third place with only Campbell (14-under) and Brian Harman (12-under) ahead of him.

Even with 36 holes left to play, Hearn expects to be nervous Saturday with the home fans watching his every swing closely and a 51-year drought on their minds.

“It’s definitely going to be a lot of attention,” Hearn said. “Everyone wants the Canadians to do well here like I do. I want to see a Canadian do well and win this tournament soon.”

Hearn is in by far the best spot of the six Canadians left in the field. Two amateurs also moved up the leaderboard in the second round.

Austin Connelly, who represented Canada at the Pan Am Games, shot a 7-under 65 to get to 6-under for the tournament. The 18-year-old noticed a drastic improvement from his first round.

“The main difference was I was hitting better quality iron shots,” said Connelly, a Dallas native whose father is from Nova Scotia. “I gave myself a lot more looks, and then whenever I did make a mistake, my short game saved me. I had a couple of really nice pitches and bunker shots.”

Blair Hamilton, a 21-year-old amateur from nearby Burlington, Ont., is right behind Connelly at 5-under after shooting a 4-under Friday.

DeLaet didn’t feel like he had a chance to make the cut with a left thumb injury hampering his game. The Weyburn, Sask., native doesn’t think the injury is too serious but was bummed it forced him out of the RBC Canadian Open.

“It hurts,” DeLaet said. “It’s an important tournament to me.”

With Mike Weir out for personal reasons, the Canadian star power took another major hit with DeLaet’s withdrawal. The pressure’s now on Hearn to carry the flag.

Hearn is trying to focus on the fundamentals of hitting fairways and greens and not think too much about history and what’s at stake.

“I’m not going to be able to win the golf tournament until Sunday afternoon, so I’ve got a lot of golf to go,” Hearn said. “It’s really hard. I haven’t been in this situation in the RBC Canadian Open before. …

“I feel like my game is in a good spot right now, and I have a chance to do something fun this weekend.”