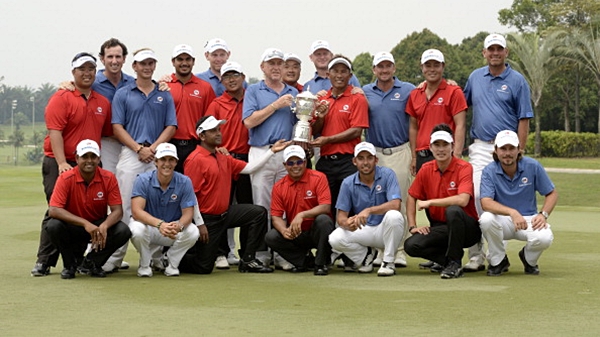 KUALA LUMPUR, Malaysia – Asia staged an improbable Ryder Cup-like comeback on the final day of the EurAsia Cup on Saturday, picking up seven of 10 points available in singles to level the score at 10-all and share the trophy with Europe.

Asia, trailing 7-3 going into the final day, briefly took the lead at 9 1/2-8 1/2 before Joost Luiten beat Koumei Oda 1-up to pull the Europeans level.

The final match between Asia’s Hideto Tanihara and Europe’s Gonzalo Fernandez-Castano then finished all square.

Tanihara sank an eight-foot putt to halve the 17th after Fernandez-Castano eagled the 16th to even the match.

On the 18th, Tanihara had a chance to give Asia the win but his birdie putt was a foot to the left. Fernandez-Castano then holed a three-footer to halve the hole, their match and the Cup.

“I’ve been in contention many times in tournaments and I never felt as nervous as I have today,” Fernandez-Castano said.

“It’s totally different when you play for a team, all of a sudden everything was down to my game. I’m pretty proud of the way I played the last few holes.”

It was a familiar scenario for Europe – both good and bad.

The Europeans came back from a 10-6 deficit in the 2012 Ryder Cup at Medinah, Illinois, to win by a point. But they also blew a 10-6 lead on the final day in 1999 at Brookline, outside Boston, to allow the Americans to win.

The Europeans had a strong team at Glenmarie Golf and Country Club in Kuala Lumpur despite missing some of their bigger names, such as Ian Poulter, Justin Rose, Sergio Garcia and Rory McIlroy. They’ll likely help defend the Ryder Cup against the United States at Gleneagles, Scotland, from Sept. 26-28.

Europe, which led 5-0 after the opening four-ball competition Thursday and by four points after Friday’s foursomes, only needed 3 1/2 points Saturday to clinch the trophy.

But Team Asia won six of the singles matches and halved two others in its comeback.

The comeback against a quality team from outside the continent in an elite competition should give golf a further boost in the region, where the sport is rapidly growing in popularity.

“The team played fantastic … in the meeting, I told the boys to push to the limit, try everything they could and stay positive,” Thongchai said. “We have got a very good result in the end.”

Europe captain Miguel Angel Jimenez defeated Nicholas Fung 1 up to give his side one of its only two wins on the day. Luiten’s victory was the other.

Europe’s Jamie Donaldson was 4-up after nine holes against Prayad Marksaeng, but had to settle for a draw.

The 50-year-old Jimenez complimented the Asian side on their play.

“It was an amazing day of golf, Asia, Europe they both win, nobody loses,” he said. “It’s been very tough … the Asian team, they played very well with six wins today and that showed that golf is very, very healthy all over their players.

“My players, they have given me everything and I have all the respect for them.”