At The Masters, some come to see golfers, others to see gnomes 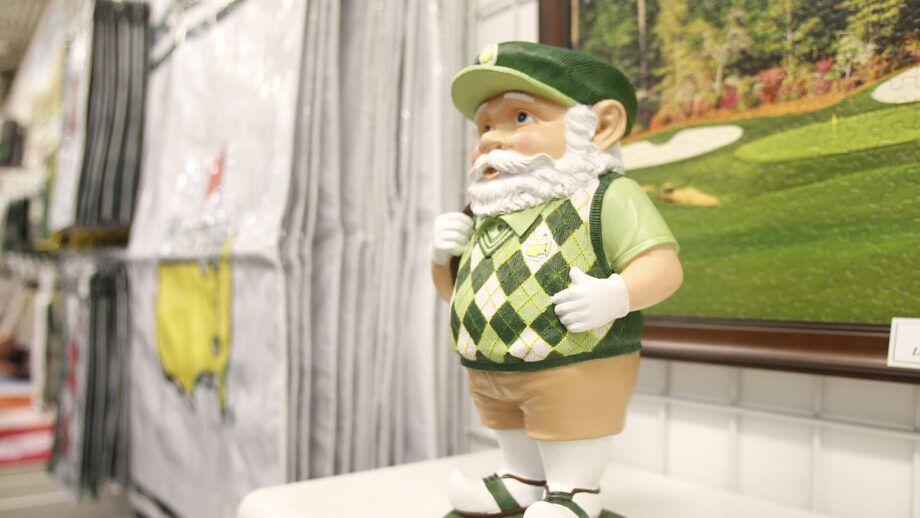 Yes. Gnomes. The must-have item at the Masters this year isn’t any of the shirts or pullovers or caps with the tournament’s logo that can only be bought by those who are lucky enough to have secured a way onto the grounds of Augusta National.

Instead, the gnome is all the rage. Just ask Tom Frettoloso, who left his house at 4 a.m. on Tuesday to get to Augusta National and was headed back to his vehicle by 8 a.m. – without having seen a single golfer take a single swing.

He had a bunch of souvenirs, including two gnomes. He wouldn’t say how he got two; signage in the store said the Masters was limiting them to one per person.

“I’m self-employed and need to get to work,” said Frettoloso, a house painter, who was weaving his way toward the gates while thousands of people were walking the other way onto the Augusta National grounds. “But I’ve gotten the gnomes just about every year. I got a ticket for the practice round and here I am and now I’m done.”

Gnomes made their Masters debut in 2016 and were a quick hit, though nobody seems to remember them being as much of a phenomenon as they are this week.

There’s a couple different versions of gnomes this year; the one that hundreds of people were lined up to get Tuesday morning was this year’s version of a caddy, standing about a foot high, dressed in a green-and-white striped Masters shirt, khakis, green-and-white shoes, a yellow cap and with a bag of clubs slung over his right shoulder.

Asking price online: Most were going for somewhere between $150 and $500 on Tuesday, depending on where you looked. The smaller version -a mini-gnome in the traditional white Masters caddie attire – could be had for considerably less.

On Tuesday, a worker at the store tried to reload the shelf with more product. The mission was futile: Shoppers were grabbing them as soon as they went on the shelf, and sometimes right from the worker himself.

“People will buy anything,” someone mused in the checkout line.

That they will, whether it’s gnomes, shirts, belts, hats and anything else they can get with the Masters logo. There’s countless reasons why: not everyone can get to the Masters since the ticket is among the toughest in sports, and the Masters also doesn’t sell merchandise online – except for some images, the Masters Journal and the Masters Annual that recaps tournament week.

And for the record, many on-site shoppers got bad news once they got into the Masters store Tuesday.

The gnomes were gone.