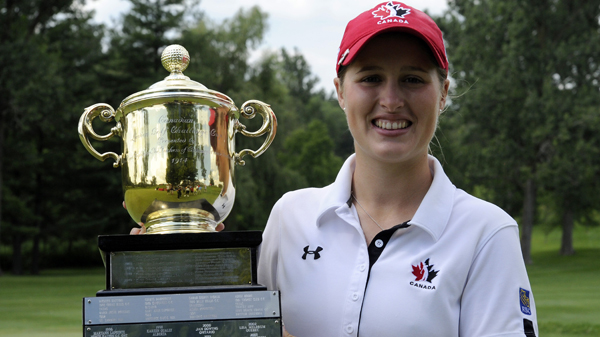 Woodstock, Ont. – Team Canada’s Augusta James ran away with the Canadian Women’s Amateur Championship on Friday winning by six strokes after a final round 2-under 69 at Craigowan Golf and Country Club.James showed that she was in command early, firing a 3-under 32 to open up her final round. Her front-nine came on the heels of Thursday’s record-setting performance where she carded the lowest round in the championship’s 101-year-old history with an 8-under 63. “There’s no better way to describe it then I’m pumped,” said James. “It’s such an honour to be part of a strong tradition, so many fantastic women before me have won this tournament so I’m proud to have my name up with them.”Over the 72-hole championship the N.C. State Wolfpack senior carded 19 birdies and only five bogeys to finish at 14-under 270. The victory also earned her exemptions into the 2014 Canadian Pacific Women’s Open and U.S. Women’s Amateur Championship.“Tristan [Team Canada’s Women’s Head Coach] and I were talking about how I’ve put in a lot of work and it’s tough because you want to force it to happen but you have let it happen,” James continued. “This week obviously I was able to do that and I’m proud of myself and happy that I was able to.”The win marks the largest of the 21-year-old’s career and was extra special for James as her family and teammates from Team Canada and N.C. State University were behind the 18th green to celebrate when she finished. “We do play an individual sport, we all have different tee time things like that but we are through and through a team and we want the best for each other,” James said. “Brooke [Henderson] and I roomed together this week and there was never any type of issues, we had a great night last night and a great night all week, to have that support from my N.C. State team and Golf Canada was fantastic.”Australia’s Su-Hyun Oh finished in solo second at 8-under par after a final round 2-under 69. Oh narrowly edged out Team Canada’s Brooke Henderson of Smiths Falls, Ont. who carded a 1-under 70 on Friday to finish in third. Kendall Martindale of Jefferson City, Tenn. claimed solo fourth at 5-under 279, while Lauren Diaz-Yi of California shared fifth place at 4-under par alongside China’s Jing Yan.  In the Mid-Amateur division (25+), Christina Proteau of Port Alberni, B.C. repeated as the champion for the fourth consecutive year. Proteau carded a final round 7-over 78 to finish seven strokes ahead of Helene Chartrand of Pincourt, Que. at 14-over 298. “It feels great, I didn’t play well today but I finished with a birdie on 18 which was nice but looking at the four days total I played really solid,” Proteau said. “I feel really proud of that achievement, you do have to play well to win that part of the tournament and it was nice to get it done today.” Chartrand captured the Mid-Master division (40+) by 11 strokes over Marion Reid of Etobicoke, Ont. finishing at 21-over for the championship.

Post-round results and a full-field list are available here.