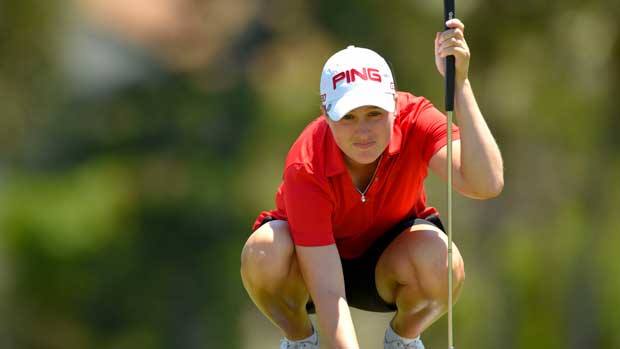 ALBANY, N.Y. – Breanna Elliott (Yarrawonga, Australia) played a practice round two weeks ago at the U.S. Women’s Open with the likes of Michelle Wie, Stacy Lewis and Karrie Webb. The appearance at the Open rejuvenated her as she carded a 6-under 65 to share the lead with Volvik Race for the Card No. 9 Augusta James (Bath, Ontario) at the Fuccillo Kia Championship at Capital Hills after day one.

It was a scoreable day as 41 players finished under-par and 62 are at even-par or lower.

Elliott made seven birdies including one on her first hole, the par-5 tenth. She also posted four birdies on a six hole stretch to open her back nine.

“I think off the tee I was really strong, I hit the lines I picked out in my practice rounds and I was quite long today,” said Elliott, who hit 10 of 13 fairways and birdied three of four par-5 holes. “For a good number of the holes, I only had a 9-iron in and that made things so much more comfortable.”

Elliott, who had her best finish of the year last week at the Toyota Danielle Downey Classic (T24), said she felt no stress on the course on Friday.

“The weather was brilliant and I didn’t feel any stress, I felt happy on the golf course,” said Elliott, who ranks 78th on the Volvik Race for the Card money list. “The putter was really working, I got the pace of the greens early on and had good rhythm.”

Elliott qualified and played in the U.S. Women’s Open two weeks ago and said that she felt refreshed and excited for golf again after competing against the best in the world.

“I played the U.S Women’s Open and that really motivated me and I had some really awesome practice partners,” said Elliott. “When you play in a massive championship like that, you can’t help but enjoy golf. I had my coach there, I had my mom and dad and it just felt like a special week and it is showing in my golf now that I am in a good place.”

So, what was it like playing with Wie and Lewis and Webb and recent World Golf Hall of Fame inductee Laura Davies?

“If you were going to choose practice partners before the tournament, those would be the names,” said 23-year-old Elliott. “I got really lucky and they were all nice girls.”

Just before the Open, Elliott did something else. She died her hair green.

“I was feeling restless and I wanted to do something different,” said Elliott. “I played with it at the Open and it stood out, there aren’t many girls out there or here with green hair.”

James, who was born on the first round of The Masters in 1993, made seven birdies in her first 15 holes of the day. Her lone hiccup was on the par-4 17th hole.

“I was hitting the ball really well today and hitting it very close and that made things a lot easier,” said James, who won the Chico’s Patty Berg Memorial earlier this year. “This round sets me up for the weekend well.”

James, who played with fellow Canadian National team member Brooke Henderson, had a nice gallery of family and friends all afternoon.

“I think Canadian women out here this year have been proving themselves with some Canadian wins and a lot of top 10’s,” said James. “Golf in Canada is progressing very well and it is nice to have that camaraderie out here.”

The 22-year-old grew up playing with Henderson and used to room with her on the road. When asked if Brooke has a bright future ahead of her, James did not hesitate.

“Brooke is playing very well and I think it is clear that she has a bright future.”

After James was done with the media, Brooke addressed James and the state of Canadian women’s golf.

“Gus (Augusta) is a great girl and a great player so we had fun out there today,” said Henderson. “Golf in Canada is growing and getting a lot stronger. As you can see, every week on the Symetra Tour there is a player from Canada near or at the top. On the LPGA, we haven’t really dominated yet, but I think it is coming.”