Austin Connelly: A dreamer with a fighting spirit 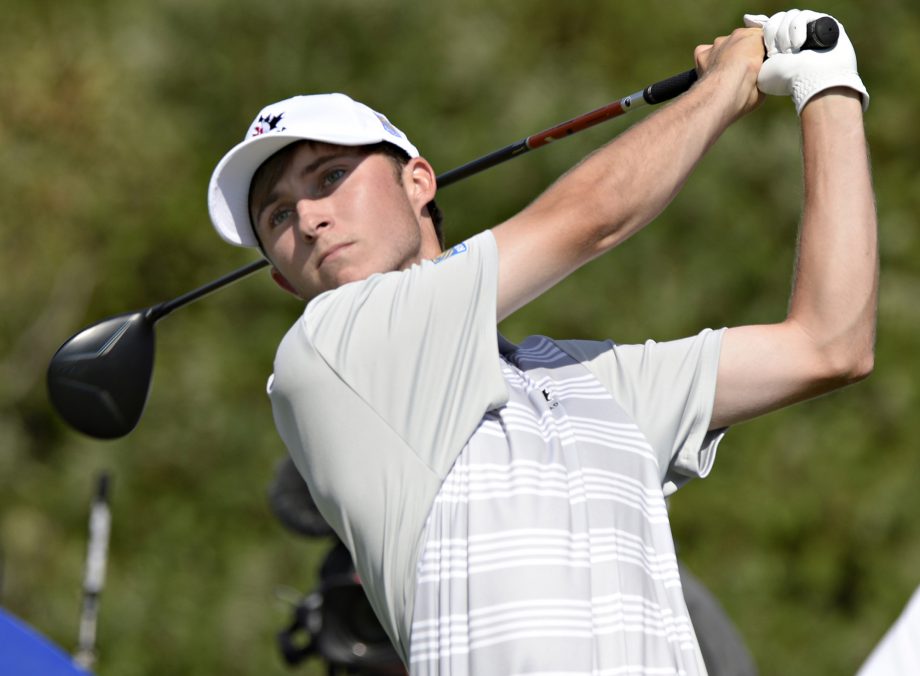 Talk about a dream come true.

First-year Team Canada member Austin Connelly was in his hotel room with his teammates in May, the night before the annual media day in Calgary, when he got a life-changing phone call. But he had a feeling it was going to happen.

The call in question? It was from Derek Ingram, Team Canada’s head coach, who said Connelly needed to call Jon Drago (the AT&T Byron Nelson tournament director) right away.

Connelly had been given an exemption into the tournament.

For Connelly, it was as if his life had come full circle. The Byron Nelson was the tournament he had attended his whole life – his mother, Bridget, says Connelly was in diapers when he first went – and now, he was going to make his PGA TOUR debut in his hometown.

Connelly ended up making the Friday cut, but didn’t finish Sunday after missing the third-round cut. It was an experience he says he is going to relish for the rest of his life, even though he barely made it there in the first place.

“I hopped on the first plane home (from Calgary) and the flight was crazy,” he explains. “There were tornadoes on the ground in the area of the Dallas-Fort Worth Metroplex where I live. We were landing and our plane was twisting and dropping. People were screaming. It was the scariest flight I’d ever been on.”

Not only was there that harrowing experience, but Connelly had injured his wrist so badly the week before, he was actually not supposed to play golf.

“I committed immediately, and I would do whatever it took to play,” he recalls.

The drama continued Friday. He rolled his left ankle going down the stairs in his hotel gym and could barely swing, but he still finished his round.

So goes the life of Austin Connelly. A fighter. Standing no more than 5-foot-5 and 125 pounds, he thinks he can, like the little engine that could.

After the Byron Nelson, the 18-year-old also received an exemption into the Nova Scotia Open on the Web.com Tour and the RBC Canadian Open in July. In between those events, he represented Canada at the Pan American Games, and, both the Canadian Amateur and U.S. Amateur championships.

He finished 5th at the Pan Am Games, just four shots back of a medal. Later in the summer, he didn’t make it past the first round of the U.S. Amateur, but decided the time was right, and he was going to turn professional.

Although he had committed to the University of Arkansas for the fall, he admits he had been thinking about turning professional since the Byron Nelson in May.

“It’s been a goal of mine to get to No.1 in the world. I know it will be a long process but I’m ready to put forth all the effort,” Connelly explains. “I felt the time was right to be a full-time golfer.”

When Connelly says he thinks is game is already good enough to compete on the PGA TOUR, he isn’t boasting.

He gained the attention of the nation Friday at the RBC Canadian Open, having shot a 7-under-par 65 to comfortably make the cut. He struggled Saturday and failed to make the secondary cut, but he and fellow Golf Canada teammate Blair Hamilton earned Low Amateur honours.

And he did it all with his back-up putter, after his gamer broke on a plane. “I actually called Bettinardi and I said, ‘hey, I’m playing a couple of PGA TOUR events this year and I can’t play a putter with Matt Kuchar’s signature on it. I can’t do it,’” he explains, laughing. “They sent me a Tour-style one, but that one broke.”

Making the PGA TOUR full-time is something Connelly has been working towards since he could barely walk.

“I used to hit balls around the house one-handed with a plastic club,” he states. “When I was 18 months old I would go out and hit shots with a cut-down set. When I was two, I finally put two hands on the club and, well, here we are.”

Although Connelly says he played other sports growing up, like tennis and basketball, by the time he was 13, he knew what he wanted to do. Inspired by Tiger Woods, Connelly got more serious about golf. Now, he cites players such as Zach Johnson (“he hits it about my distance”) and Jim Furyk as guys he feels he compares well with.

And then there’s that friendship Connelly has with Jordan Spieth.

Connelly and Spieth have the same coach and fitness trainer so the dual-citizen sees Spieth in the gym more than anywhere else. They met when Spieth was finishing at the University of Texas and they chat at the gym multiple times per week and try to squeeze in a round where possible.

“As good as he is, he’s just 21 and there’s so much to learn,” Connelly explains. “But obviously I learn a lot from him. I pick his brain a lot about certain things. He’s just the golden boy for golf, I don’t know how else to put it.”

Being friends with a two-time major champion results in some cool moments, too.

“I got to see the Green Jacket, which was pretty neat,” Connelly says. “I was walking into the gym and (Jordan) is just standing there holding it. Then he put it on. It was pretty cool.”

There’s likely a lot to come before Connelly is competing for a major himself, but it’s another thing he can dream about.

And if there are any precedents set about Connelly and his dreams, well, it will likely come true.