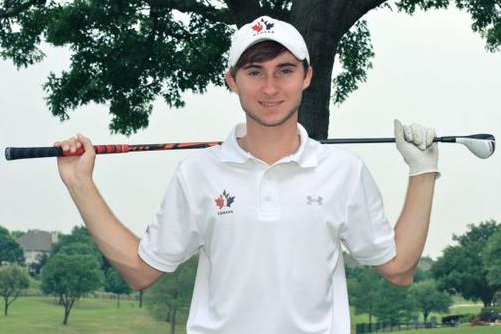 Halifax, N.S. – The Web.com Tour’s 2015 Nova Scotia Open will kick off in just two weeks on Thursday July 2nd at Ashburn Golf Club – New Course, with a strong representation of Canadian talent in the field, including No.1 ranked amateur golfer in Canada, Austin Connelly.

Connelly, a dual U.S. and Canadian citizen who lives in Irving, Texas and spends his summers at his grandparent’s home in Digby County, Nova Scotia, will play in the only Web.com Tour event on Canadian soil. Connelly, whose home course is Clare Golf & Country Club in Church Point, N.S., describes his Nova Scotia connection as always being special to go back each year to visit family and friends, but also to essentially what was the start of his goal to become the No.1 golfer in the world.

“It’s an awesome feeling to be able to play in a professional event in a province where I golfed a lot in my earlier years,” says Connelly. “I’m looking forward to teeing it up with some of the best players in the world and representing Nova Scotia in this event. It’s important for me to celebrate my roots and this is one opportunity to allow me to do that.”

Connelly will tee off in the British Amateur this week from June 15-20. He is also scheduled to play in the Canadian and U.S. Amateur Championships, and will represent Canada at the at this summer’s 2015 Pan Am Games in Toronto.

Earlier this year, Connelly made his debut in his first PGA TOUR event at the AT & T Byron Nelson Championship through a sponsor’s exemption. He was also recognized as one of four Byron Nelson International Junior Golf Award recipients – an award that world No.2 ranked golfer Jordan Spieth had also previously received. As well, Connelly won the 2015 Jones Cup Invitational this season in Sea Island, GA, one of the most prestigious amateur events in the world, after finishing 2nd in the 2014 event. With his win, Austin was awarded an exemption into the PGA TOUR’s 2015 McGladrey Classic.

Connelly is a two time AJGA First Team Junior Rolex All-American and a member of the victorious 2013 and 2014 Wyndham Cup Teams, in addition to the winning 2014 Jr. Ryder Cup Team. That same year, Connelly won the 2014 AJGA FootJoy Invitational by a six stroke margin. With his decorated junior career, Connelly fast-tracked his way onto Team Canada’s Amateur Squad. As part of the National team, Connelly finished runner-up at the 2014 Argentine Amateur and captured gold for Canada at the 2014 Tailhade Cup both as an individual (by seven strokes) and as a team (by 19 strokes).

The remaining field and exemptions will be announced in the coming weeks leading up to the event, but fans can expect a strong Canadian presence similar to last year, where 20 Canadian golfers made up the field of 156 players in the Nova Scotia Open.

The Nova Scotia Open featuring the RBC Canada Cup will be an event to watch this summer, especially to see if another Canadian will take home the Nova Scotia Open Champion title, following in Calgary, AB native Roger Sloan’s footsteps – who is now on the PGA TOUR in part to his win.

For more information on the Nova Scotia Open and to purchase tickets click: here.