Austin James making a name for himself 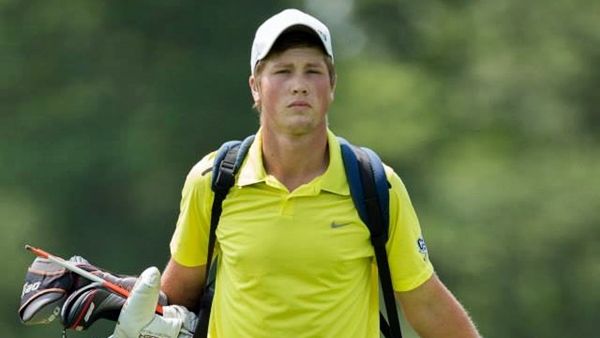 For those who don’t know him, Austin James is an 18-year-old sophomore out of Charleston Southern, in Charleston, S.C. He won the 2014 Canadian Junior Boys Championship with a 15-under 273 for a four-stroke victory. How did he get here? Well, it seems as if the road to success was paved out for him at an early age – the foundation at least.

Austin comes from a family of golf. His immediate family lives on the grounds of Loyalist Golf and Country Club in Bath Ont., where his father, Geoff, is the head PGA of Canada professional. This past week, James played in PGA Tour Canada’s Great Waterway Classic, held on the very own grounds of Loyalist. Against the pros, James finished tied for 49th with an 8-under 280 (71-68-73-68). Home course or not, a very promising finish for the young sophomore.

James has enjoyed success in the past, winning a couple Canadian Junior Golf Association (CJGA) events in 2013 before winning a national championship. With age, he seems to be developing a greater understanding of the game, evident in his recent string of finishes.

While still young, James has directed his focus to the collegiate level by looking to get into the lineup at more NCAA events, before his ultimate plan of turning professional.

“I got to play about half of our team’s events – overall though, I really enjoyed my first year there,” said James. “I’d like to have a solid college career and see how good I can get while I’m still at school and hopefully go pro after that. It’s still a while away, so I am just more focused on getting my game better and better.”

Austin is the younger brother to sister Augusta James, three-year member of Team Canada’s National Amateur Squad. Just as you’d expect, the support for each other within the family is strong. A week after winning the Canadian Junior Boys title, Austin headed down south with Augusta to help her prepare for the U.S. Women’s Amateur in Glencove, N.Y.

Taking nothing away, Austin James is a talent in his own right – although he is still modest enough to admit his older sister holds the upper hand.

“She was always better than me, and she still is,” laughed James of a match with Augusta. “I think that has helped me be more competitive and it gives me someone to look up to and compare myself to.”

“It was great to see her win that title, especially battling the world’s no. 2 (Canada’s Brooke Henderson) and no. 6 (Autralia’s Su-Hyun Oh) ranked amateurs in the world,” said Austin. “It gave me a lot of confidence to see all the work she has put in pay off.”

Looking to the future, Austin plans to improve on consistency and continue learning in college competitions at Charleston Southern. Meanwhile, sister Augusta will look to close out her career at N.C. State in memorable fashion.

The future is never a sure thing, but don’t be surprised if you see the name ‘James’ atop golf leaderboards for many years to come.