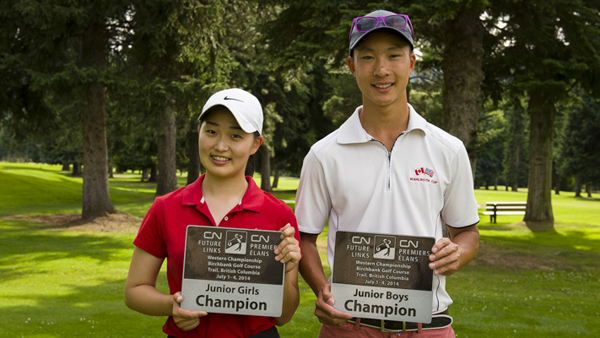 After gaining a three stroke lead in the second round, Yu continued his strong play today, shooting 1-under-par 71 for a final score of 5-under-211. This win has earned him an exemption into the Canadian Junior Boys Championship, taking place later this summer in Niagara Falls, Ont.

“It always feels great to earn an exemption into the national event,” said Yu after today’s win. “It will be great to go back again and see how my game holds up against the best in Canada.” 2014 will mark the fourth year Yu has competed in the Junior Boys Championship, and he has set his sights on success: “Every year my game is getting better, I’m constantly trying to improve little things. So I’m really looking forward to going back to the championship this year.”

Four strokes behind Yu, Logan Yanick, 17, of Courtenay, B.C. claimed second place after a final round of 69, and a total score of 1-under-par 215. 17-year old Cole McKinnon of Surrey continued to hold onto his third place spot with rounds of 71-73-72.

In the Junior Girls division, Lee finished the championship with a score of 14-over-par 230 after rounds of 74-76-80.  This win has earned her an exemption into the Canadian Junior Girls Championship, taking place late July in Thornhill, Ont.

“Today’s round was tough because I had an afternoon tee time and the wind really affected my play,” said Lee of today’s round of 80. “But this is my last year competing in junior events, so to have won a CN Future Links event in my last year as a junior feels great.”

Marie Donnici, 18, of Vancouver claimed the second place spot, scoring four birdies on the front-9 for an even-par round and total score of 16-over-par 232. Third place is shared three ways by Calgarians Kenna Hughes and Quinn Fitzgerald and 15-year old Natalie Chu of Vancouver. The trio finished with a final score of 17-over-233.

The top six competitors in the Junior Boys division of each CN Future Links Championship will earn exemptions into the 2014 Canadian Junior Boys Championship, which will be contested July 28 – August 1 on the Legends on the Niagara’s Battlefield course in Niagara Falls, Ont. The Junior Girls champion from each CN Future Links Championship will earn an exemption into the 2014 Canadian Junior Girls Championship which runs July 28 – August 1 at the Thornhill Golf and Country Club in Thornhill, Ont.  In addition, the champion receives an exemption into a 2015 Canadian Women’s Tour Event.