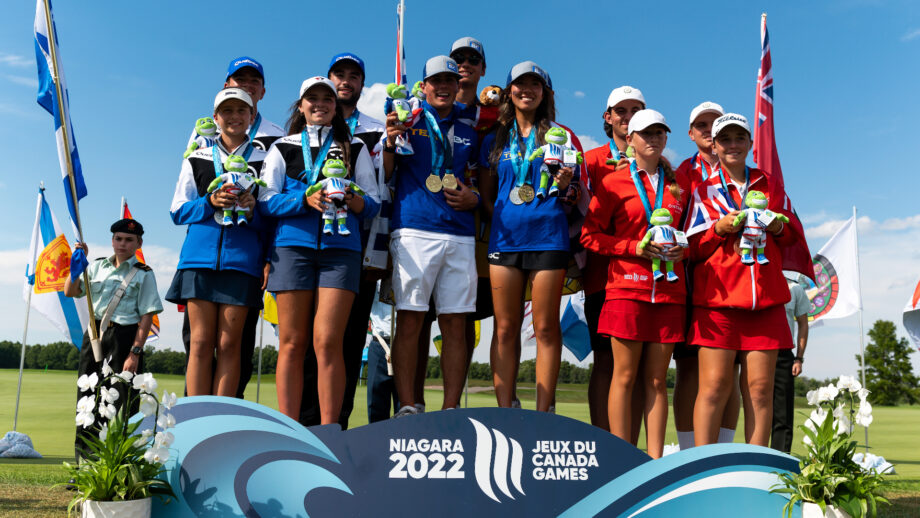 For the third time in four attempts since the inaugural golf tournament in 2009, B.C. took home all the gold that was at stake. A 27-stroke victory earned them top honours in the newly introduced mixed team division, while Cooper Humphreys of Vernon, B.C. and Tina Jiang of Richmond B.C. claimed the gold medals in their respective individual divisions.

The hardware didn’t end there for the west coast champions. Surrey B.C.’s Lauren Kim earned silver medalist honours as the runner-up in the individual female division, finishing three strokes back of her teammate Jiang. B.C.’s 18 medals are the most out of any province since golf was introduced at the multi-sport event.

Québec’s streak of medals in golf at the Games remained intact with a pair of runner-up finishes: the four-player team was awarded silver in the mixed team division, while Guillaume Paquette seized second place honours in the individual male category. La Belle Province’s medal count in golf at the Games improved to 14.

It was a record-breaking week in Niagara; in each of the four rounds, a record was broken, and new ones were set. The low single-round score for a female at the Games was snapped twice, first by Lauren Kim and then by her teammate Tina Jiang just two days later. Logan Graf rewrote history by posting a 7-under-par 65 to set the new low single-round score ever at the Canada Summer Games. To cap off the historic week, Jiang planted her seed as the new low 72-hole tournament score record holder.

Both the men’s and women’s individual divisions were deadlocked entering Saturday’s final round. Early into the spectacle, Jiang established herself alone at the top and didn’t budge. The 17-year-old played the final 36 holes to near perfection, making only one bogey on her final hole of the tournament. During that stretch, she rolled in 11 birdies to storm past Kim, who she trailed by five strokes after the opening two rounds of competition. Rounds of 69-71-68-66 (-14) earned the B.C. native the gold medal.

“I had so much fun; that’s the most fun I had in a while,” said Tiang. “The other teammates are so amazing, the coaches are amazing too, [it] was such a great experience.”

Humphreys and Paquette’s final round showdown felt more like a boxing match than it did golf. All day, the pair went pound for pound, shot for shot. Naturally, it came down to the wire. With a one-stroke lead on the 72nd hole, Humphreys got up-and-down from a greenside bunker to save par and win the gold medal. After an opening round 73, the Team Canada member recomposed himself and fired rounds of 67-67-70 for a total score of 11-under.

“It feels good. I haven’t been playing the greatest lately so it’s nice to get this one,” said Humphreys. “I love competition, I love the pressure and the crowds were awesome; the more people the better for me – I love it.”

Speaking to his poise and calm demeanor on the course, the 16-year-old says he just tries to be himself out there.

“I’ve tried experimenting in different ways, being super serious and not so serious. Now I’ve just found the right middle, just being Coop is the way I play the best.”

The next edition of the Canada Games will take place from Feb. 15 – March 5 when Prince Edward Island hosts the 2023 Canada Winter Games. The next golf tournament will surface at the 2025 Canada Summer Games which are scheduled to take place in Newfoundland and Labrador.

QUOTES FROM THE WEEK

“I kind of want to break that (record) tomorrow; I know I can definitely go lower,” – Lauren Kim on her record-breaking opening round.

“I remember my buddy Ethan yesterday telling me – I missed an eagle putt like 20 feet, it just lipped out – and he was like, ‘You’re going to get that one back.’ So, there it is,” – Ryan Holwell on his eagle on no. 18.

“I’m hitting the ball better than I ever have so that’s motivating week in and week out, [it] still keeps me coming out here and excited to play. And especially being at this event, Canada Games, that’s something every athlete dreams about all their life so there’s a lot of motivation there and a lot of energy all around the course and the facility, so [I’m] feeling pretty good.” – Ethan Efford on a busy last two weeks that saw him go to B.C. for nationals, back to N.L. for two days and straight to the Games.

“I just hit my tee shot to like 20 feet and I handed him my putter on the green and he set up, looked at it and just drained it. Even just right as he hit it, I was like, “No way, no way,” because it was just on line the whole way – it was just awesome!” – Cooper Humphreys on his experience with a First Tee participant who sank a 20-foot putt for him during the ‘walk with a player’ portion of the activation.

“On the back nine, I was in the zone. I made two eagles, two birds, I lost count of how many under I was today. It was a lot of fun out there today and meeting two new players was a lot of fun.” – Peter Blazevic on his round today.