Back to the future: Shutterbugs out in force at the Masters 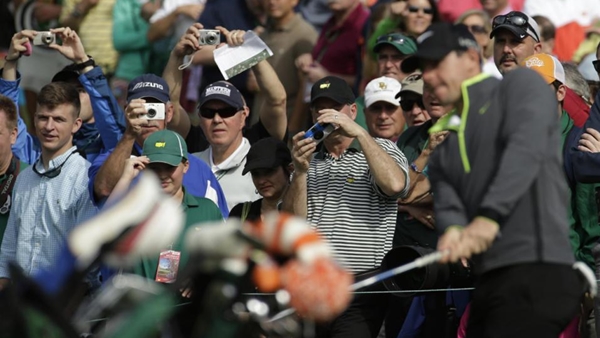 AUGUSTA, Ga. – There are so many cameras at the Masters this week that practice rounds are beginning to resemble kids’ birthday parties back in the day.

Barred from bringing their cell phones on the course, fans adapted by going back to the future, dusting off pocket-sized digital cameras or their old 35mm bodies and lenses and re-learning how to use them.

But a quick refresher course is all they’re allowed. When play begins Thursday, fans will have to put them back on the shelves.

“Actually, the last time I had this out was Easter,” Wayne Watson said about the large black Nikon hanging around his neck.

And the time before that?

“No idea,” he said. “Probably the Easter before.”

More than a few of the fans lugging around similar equipment were, like Watson – who made the two-hour drive from Macon – experiencing Augusta National in person for the first time.

Most just planned to mosey around until something caught their fancy. Some had general targets in mind – a favorite player or two, the trio of back-nine holes reverentially dubbed “Amen Corner,” or the gigantic manual scoreboard alongside the first fairway.

Then there was the occasional experienced big-game hunter, decked out with camera bags and an array of lenses.

“I’m after Phil Mickelson,” said Kim McNeeley of nearby Aiken, South Carolina. “I got a great shot of him the last time I was here – 18 years ago.

“But there are plenty of guys more serious than I am,” she added. “I had to borrow this from a friend who just had a baby. A few minutes ago, I saw a guy actually loading film into his camera. Film. Now that’s old school.”

Stepping back in time produced more than a few comical moments.

Parked in lawn chairs behind the first tee, two pals leaned in close as one tried to figure out how to take a “selfie” with a point-and-shoot camera – never mind that the term hadn’t even been coined when the camera was originally manufactured. Behind the seventh tee, Kevin Davis of Gibson City, Illinois, recounted the preparations he went through to make sure his 4-year-old digital camera was ready to roll.

First, he had to find it – “It took me awhile to remember where I left it,” he said, finally remembering it was in a desk drawer – and then make sure it was charged.

“I’ve got a big camera, but I didn’t want to lug that around,” Davis added. “That’s usually for family events.”

But he might have had second thoughts when his twin 5-year-olds saw the camera and realized it wasn’t a phone.

“They were scratching their heads,” he recalled. “They said, `Daddy, why is it so big?'”

The fact that so many wound up opting for the big camera likely had to do with the number of serious hobbyists. While many planned to share their photos with friends on social media, a few planned to commemorate the trip with a photo album – talk about old-school – and in the case of Wes Rackley, make quality 8×10 framed prints and give them as presents.

Few people, though, seemed as comfortable carrying around all the serious gear as Brett Pavel of Atlanta. He was at Augusta National for the 20th time – “I think that’s right,” he said, “because I’ve got at least 18 shirts – and said he has a camera around his neck at least once a week.

“My wife calls it my `pacifier,'” he laughed, “because our youngest son plays competitive soccer and she says taking pictures is the only thing that keeps me from cussing and yelling at the refs and everybody else.”