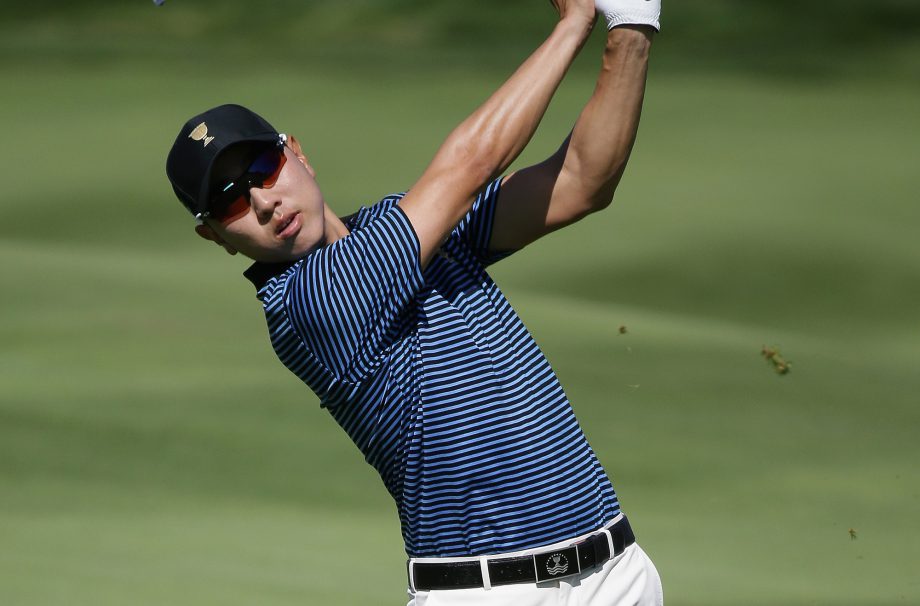 INCHEON, South Korea – Bae Sang-moon never felt the kind of pressure that weighed on him Friday at the Presidents Cup.

He only made news in South Korea this year during a failed bid to extend his waiver for mandatory military service. He wasn’t sure what kind of reception he would receive at the Jack Nicklaus Golf Club Korea. And as Bae stood over a 12-foot putt that was critical to the International team’s rally, half his teammates were on the edge of the green and thousands of Koreans were watching in the gallery.

“I’m pretty sure he was nervous. I was nervous watching him,” Danny Lee said. “So he had to stand up and man up, and hit that golf ball.”

The celebration when the putt dropped was raw emotion, a defining moment for Bae and the International team in its bid to finally give the Americans a worthy fight.

Bae teamed with Lee for a 1-up fourballs victory over Rickie Fowler and Jimmy Walker, and the Internationals won their first team session in four years to pull within a point of the Americans. Next up is a double session Saturday of eight matches that will shape the final round.

“That putt Sang-moon made on No. 18 today was probably the highlight of the last two days for us,” International captain Nick Price said.

Price had other reasons to cheer.

Louis Oosthuizen and Branden Grace made three big putts around the turn and sailed to a 4-and-3 win over Jordan Spieth and Dustin Johnson, while Charl Schwartzel and Thongchai had little trouble against an American team of Chris Kirk and Bill Haas that went 13 holes of nothing better than par.

“I think the U.S. team after yesterday, they probably thought it was going to be a walk-off,” Grace said. “We put our chests out and we went full heart. We’re in a good position now. We’re just one point back, and you know, a lot can happen.”

The U.S. lead might have been slightly larger if Phil Mickelson had known the rules.

A penalty that baffled even the captains – the match went from all square to 2 up in one hole – began when Mickelson was not aware of the one-ball rule.

Players must stick with the same model of golf ball for the entire match in fourballs and singles. That didn’t cross Mickelson’s mind until after he switched to a firmer golf ball on the par-5 seventh to help him reach the green in two. Only when he saw U.S. captain Jay Haas did he ask him to make sure it was OK.

“It’s my responsibility to know that,” Mickelson said. “I should have at least asked about it before I teed off.”

The penalty in this format is known as a one-hole adjustment – one hole is awarded to the other team. The rules committee made it worse by mistakenly telling Mickelson that he was out of the hole, and so Mickelson picked up his ball. Only later did the committee realize that Mickelson should have been allowed to finish the hole because the penalty already had been assessed.

Jason Day made birdie to win the hole, and the International team got credit for another hole because of the penalty on Mickelson. It made a difference in the end when Day made an 8-foot birdie putt to halve the match. Based on scores for each hole, the Americans would have won.

“I didn’t realize you could lose two holes on one hole,” said Adam Scott, who played with Day.

The ruling overshadowed Mickelson’s great rally – a birdie on the 11th, holing a 142-yard bunker shot for eagle on the 12th – to get his team back in the match. And while it likely cost the Americans a half-point, Mickelson didn’t seem too bothered.

“I feel like we spotted the International’s best team two holes, and they still couldn’t beat us,” Mickelson said. “Just saying.”

Day didn’t bite on Mickelson’s barb. The International team was happy to be back in the match. Price said he spoke to his team Thursday night about trying to relax, and he saw enough of that to give him hope going into the weekend.

The lone American victory came from J.B. Holmes and Bubba Watson, the big-hitting duo who has not lost this week.

The biggest blow for the International side came from Oosthuizen, when he rolled in a 70-foot birdie putt on the eighth hole to square the match. Grace followed with a pair of birdies for a 2-up lead, and the Spieth-Johnson tandem didn’t put up much of a fight. They made only two birdies, none over the final eight holes.

“We both played very poor rounds of golf and we didn’t have many chances,” Spieth said. “So it was ‘Merry Christmas’ to the other guys.”

It sure felt like it to Bae, who made his debut in the Presidents Cup one to remember.

“The first time for me to play in The Presidents Cup, and I have already very good memories,” Bae said. “And I’m very happy about that.”