Bae tied for lead at Barclays as military service looms 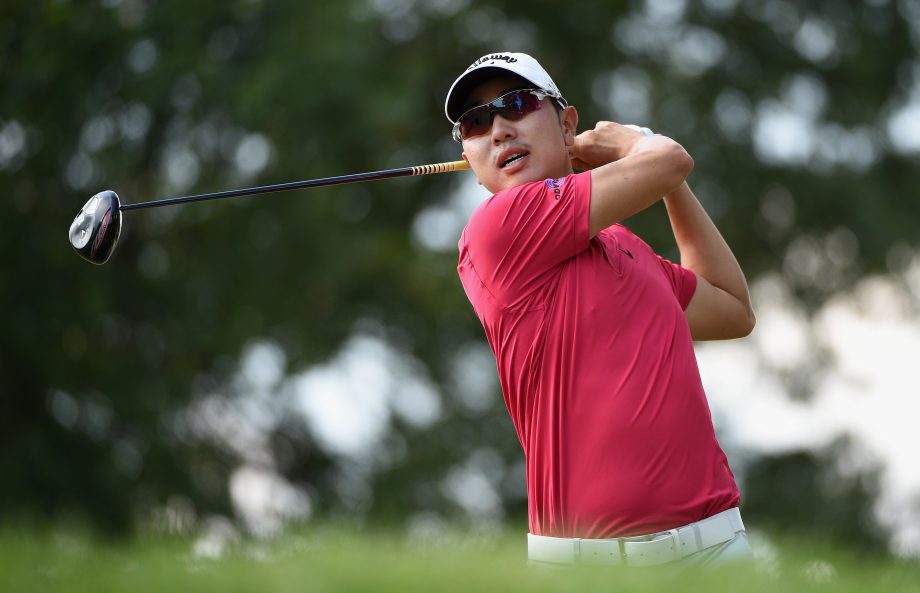 EDISON, N.J. – Ryan Palmer can’t imagine the emotions if he were to win The Barclays a week after his father died. Bae Sang-moon would love nothing more than to play in the Presidents Cup at home in South Korea before he starts his mandatory military service. Jason Day is one round away from being in the race for No. 1 in the world.

The FedEx Cup playoffs suddenly are about a lot more than a $10 million bonus at the end.

Bae and Day traded birdies through the third round Saturday at Plainfield Country Club. Their best-ball score would have been 56. On their own, each had a 7-under 63 and were tied for the lead going at 11-under 199, one shot ahead of Bubba Watson (67).

Bae has to start his two-year military stint when he returns to South Korea. With a victory on Sunday, he would be assured a spot on the International team for the Presidents Cup, which is being held in his home country for the first time and will be the biggest golf event in South Korea.

“I have a really tough situation right now, but I don’t think about it anymore, actually,” he said. “I have to go back. So that is a few weeks later. So I just want to play good golf this week and really want to play Presidents Cup in my country.”

The emotion comes from Palmer, who hasn’t had a top 10 in the last three months. He is playing a week after his 71-year-old father died just north of Amarillo, Texas, when his SUV overturned. Palmer has found peaceful moments on the golf course, and while dropping two shots late in his round Saturday, he had a 65 and was two shots behind.

At times, Palmer caught himself wondering what it would mean to win with a family grieving at home.

“But then I just kind of come back saying, `OK, let’s just hit this shot, let’s not get too ahead of ourselves yet.’ I don’t know what it’s going to be like if it happens,” Palmer said after a 65. “I can’t put into words what it would mean for sure.”

Day, just like he did on the par 5s at Whistling Straits when he won his first major two weeks ago, cracked a 343-yard drive down the middle on the 601-yard 16th hole, and then hit a 4-iron to 18 feet and holed it for eagle to tie for the lead.

Day and Bae made bogey from the rough on the 17th, and both got up-and-down for birdie on the reachable 18th.

A victory by the 27-year-old Australian would be his fourth win of the year, tying him with Jordan Spieth for most on the PGA Tour this year, and allow him to join the race for No. 1 going into the final month of the tour season. Spieth, who missed the cut, will lose the No. 1 spot to Rory McIlroy.

He had been able to avoid his mandatory military service through his PGA Tour career until it was determined that he spent too much time in South Korea last year. He appealed the decision at the start of the year, and the military courts ruled a month ago that he had to serve. Bae accepted the decision, though he remains in America to finish out the FedEx Cup. It was not clear when the military service starts, or if he could even play Oct. 8-11 in the Presidents Cup.

And if Bae gets to the Tour Championship and captures the FedEx Cup, the $10 million might be a secondary award. Bae also would receive a five-year exemption, which would come in handy when he returns from the military.

The FedEx Cup trophy is a long way off. So is the trophy for The Barclays.

British Open champion Zach Johnson and Henrik Stenson each had 67 and joined Palmer at 9-under 201. Former PGA champion Jason Dufner had a 69 and was four shots behind. Ten players were separated by five shots going into the final round.

Palmer can only hope for the same soothing feeling golf has given him this week. The problems he has had driving the ball seem to have gone away. So has the irritation from hitting bad shots. Golf has been a refuge this week. His caddie, James Edmondson, also was close to Palmer’s father. Edmondson and Palmer’s agent, Mike Chisum, were with him in Amarillo and all week in New Jersey.

“Them being here this week has been huge for me to just kind of keep my mind off of it,” Palmer said. “When I get inside the ropes, I get those four hours to not thin a whole lot about it and really try to play golf with some peace and comfort.”