Barkley and Stasiuk defend titles at 2022 Canadian All Abilities Championship, presented by BDO 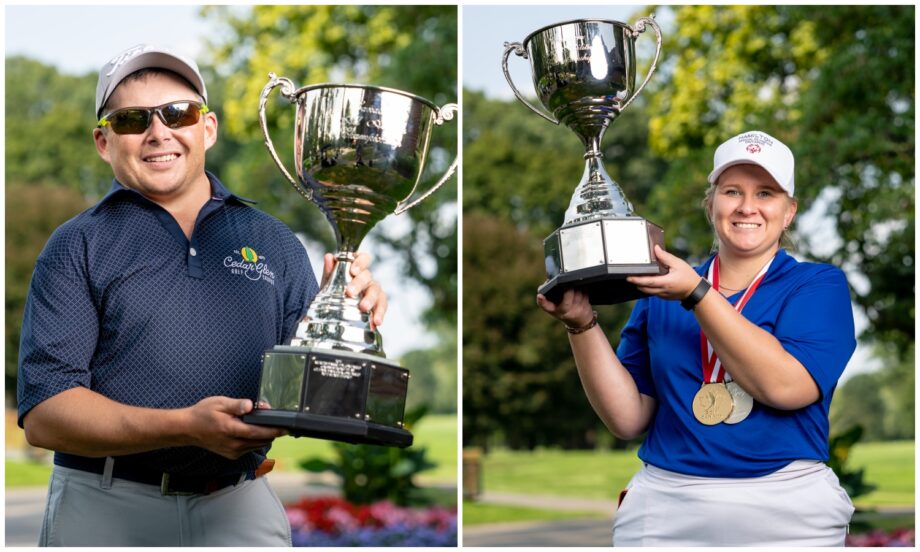 Barkley followed up an opening-round 4-under 67 with an even par 71 on Wednesday to finish the championship at 4-under 138, one shot better than runner-up Chris Willis of Aurora, Ont. whose round of 1-under 70 was the low round of the day.

“The conditions were awesome tee to green. It’s a ball striker course you know, tee to green which I’m usually pretty good at it. I think I hit 14 greens today and I hit 17 yesterday, so it was definitely suited to my game,” said Barkley, a member of Cedar Glen Golf Course who came into the championship ranked no. 6 on the World Gross Ranking for Golfers with Disability (WR4GD). “I played smart percentage wise, and Kris is an amazing player. I battled with him in the Ontario one and I look forward to many battles with this guy.”

The win marks back-to-back victories in the Men’s Gross Stroke Play division for the 34-year-old Barkley, who won the inaugural Canadian All Abilities Championship in 2021 at Humber Valley Golf Club in Toronto. Barkley’s impressive season also includes a victory at the 2022 Ontario Disability Championship in July, his fourth consecutive win at the provincial event.

“It feels pretty awesome and amazing,” said Stasiuk, who also collected her fourth consecutive title at the Ontario Disability Championship earlier this summer. “It was a tough situation. It was back-to-back-to-back with Tess on the back nine. I’ve been working a lot on my game, my mental game. I went to Pinehurst in July, and it helped me prepare for this.”

In the Men’s Net Stableford competition, the local favourite Delaney, a member of Pointe West Golf Club in Windsor, earned 35 stableford points Wednesday to finish with 75 total points for the championship, two clear of Pisaric (73). Rounding out the top-five were Randall Mackus of Prince George, B.C., (72) in third and Willis in fourth (71) with Vic McLelland of High River, Alta. and Kristian Hammerback of Winnipeg, Man. in a share of fifth at 70 stableford points.

Click here for complete final results from the 2022 Canadian All Abilities Championship.

As a legacy of the second annual Canadian All Abilities Golf Championship, Golf Canada was proud to donate a SoloRider (Para Golfer adaptive golf equipment) to the City of Windsor to support golfers with a disability. The SoloRider will be utilized at the Roseland Golf & Curling Club.

A venue for the 2023 Canadian All Abilities Championship will be announced at later date.

The Canadian All Abilities Championship was contested September 13-14 as a 36-hole competition featuring players from Canada and the United States with neurological, intellectual, sensory, and physical impairments. First held in 2021 at Humber Valley Golf Course, the competition supports Golf Canada’s commitment to create a more inclusive and respectful sport environment across the Canadian golf community.

Golf Canada has worked with several partner organizations on the Canadian All Abilities Championship including Special Olympics Canada, Blind Golf Canada, Canadian Amputee Golf Association, Emeritus Golf, The R&A, EDGA, and others to ensure an inclusive and fair competition is provided to the athletes.