Barnes extends lead to two shots at The Players Cup 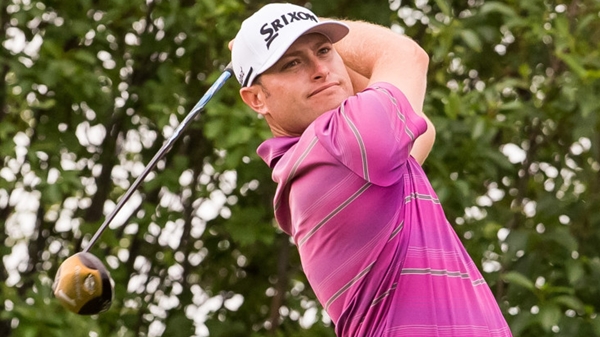 Winnipeg – Kalamazoo, Michigan’s Erik Barnes extended his lead at The Players Cup on Friday, carding a 1-under 70 at Pine Ridge Golf Club to take a two stroke lead heading into the weekend.

After a 63 on Thursday, Barnes battled windy conditions and a few nerves in the second round to grind out an under-par round and get two shots clear of a group of four players, including Bright’s Grove, Ont.’s Matt Hill, Yakima, Washington’s Brock Mackenzie, Little Rock, Arkansas’ Drew Stoltz and Fargo, North Dakota’s Josh Persons.

“I didn’t handle it so well on the front side,” said Barnes of starting the day with the lead. The 26-year old started with two bogeys on his front nine, but rebounded with three birdies coming in to reach 9-under. “I needed to be a little tougher mentally. I let a couple shots go and got frustrated. I tried to let go and pretend like it didn’t matter on the back side and tried to act like I didn’t care what I was shooting. I just tried to free myself up, which I did.”

Barnes will be in a familiar position heading into the weekend. He held a share of the 36-hole lead with England’s Kelvin Day last week at the SIGA Dakota Dunes Open presented by SaskTel. The Austin Peay State graduate said he was hoping to put the experience to use Saturday in Winnipeg.

“As long as I can handle it a little bit better than I did last Saturday,” said Barnes, whose third round 73 in Saskatoon took him out of contention. “I was a little bit nervous and made some nervous golf swings early in the round. I got off on the wrong foot, and I had I not done that I might have had a better chance of winning that golf tournament.”

Barnes admitted that he will feel pressure on the weekend as the field attempts to chase him down, but that he was ready to accept the challenge of being the frontrunner.

“We all know what’s a stake and we all want it really badly, otherwise we wouldn’t be playing,” said Barnes. “The guy that’s going to get it done is the guy who deals with it the best, and hopefully that will be me.”

Hill, who finished tied for eighth here in 2012 when he won the Order of Merit on PGA Tour Canada, carded a 3-under 68 to join a group tied for second heading into the weekend.

“I think I hit it a little bit better today but played pretty similar. I just kind of stuck to my game plan. I’m just going to try to keep doing what I’m doing,” Hill said.