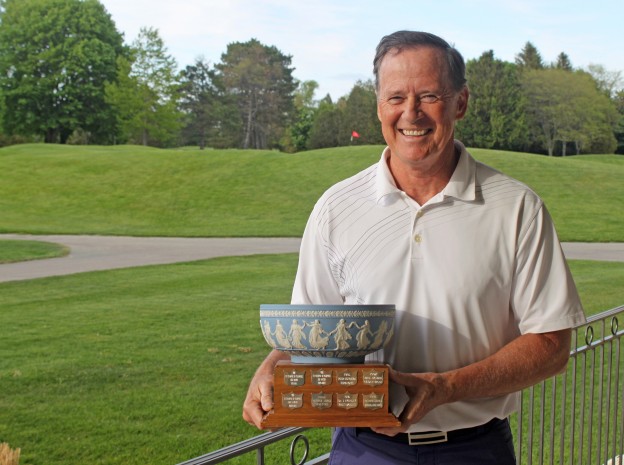 COPETOWN, Ont. —The Golf Association of Ontario’s (GAO) Senior Men’s Champion of Champions took place May 21 at the Beverley Golf & Country Club in Copetown. A total of 70 senior club champions from across the province teed it up to see who would claim the 2015 title. In the end, it was Whitby’s Barry Fairhurst, from Whitevale Golf Club, who took home the honour.

Fairhurst was the first player to bring his card to the scorers and had to wait to see where his one-over (71) would end up. It look as though it would stand until 2012 winner, Collingwood’s Mike Jackson, turned in a one-over (71) of his own that forced the two back to the first hole for a playoff.

During the playoff, Jackson, from the Georgian Bay Club, put his tee shot in a fairway bunker, while Fairhurst sailed his to within 80 yards of the green. Fairhurst would chip within nine feet and stepped up and drained his birdie putt for the win.

“Hearing who has won this before and knowing how prestigious it is, makes it great honour to be on the trophy. These are the best champions from their golf courses in the province,” said Fairhurst.

Fairhurst went on to talk about the dramatic win and where it ranks for him. “A birdie on the first playoff hole is always a good thing. The worst case, you are probably just going to the next hole. I hit a good drive, chipped it close and sank the putt down the middle. This win is definitely way up there for me.”