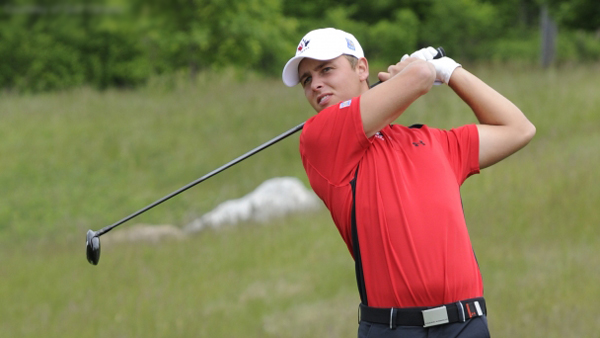 ALLENDALE, Mich. – The No.1 ranked Barry Buccaneers took home the NCAA Men’s Div II title on Friday, their second in as many years.

The NCAA championship format begins with three stroke play rounds. Each team has five players, with the best four scores counting towards each daily total. The top eight teams advance on to elimination match play.

Barry University held their spot at the top of the stroke play leaderboard, thanks in part to their tournament-low 280 on Wednesday’s final round. The Bucs came in at 25-over par, advancing to match play as the No.2 seed. They were led by Surrey B.C., native and Team Canada member, Adam Svensson.

The 20-year-old sophomore finished as runner-up at 1-over 214 (71-75-68) behind medalist Tim Crouch of Florida Southern. Svensson made a run on Wednesday with a four-birdie 68, but was matched by Crouch to fall shy by just one stroke for an exciting finish at the Meadows.

Svensson’s season has been a memorable one. The Sport Management major has won seven individual NCAA titles, and looks poised to be a leading candidate for the Jack Nicklaus award, given to the most outstanding golfer in the division.

In quarterfinal match play, the Bucs defeated No.7 seed Cal State Monterey Bay, 3-2. They advanced to the semi-finals, where they defeated Chicago State 3-2 to move on to the finals against Nova Southeastern, eventually defeating them 3-1 to take home the trophy once more.