BC Golf hangs on to repeat as PNGA Cup champions 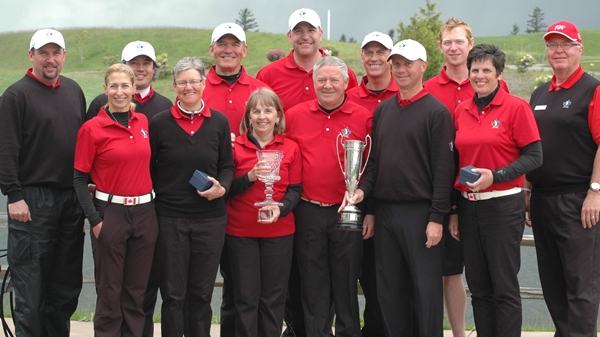 Federal Way, Wash. – The 12-person team from British Columbia Golf withstood a significant rally by the team from the Oregon Golf Association to hang on and win the 9th PNGA Cup, successfully defending their title in the championship.

The Ryder Cup-style matches were held at The Home Course in DuPont, Wash. and featured 48 of the finest amateur golfers representing the Washington, Idaho, Oregon and British Columbia Golf associations.

In the second day of the matches, which consisted of singles play on this final day, Team BC Golf began the day with a comfortable lead but could not gain much traction in the early going. Team OGA began the day in last place, but won 10 of the 24 matches. The outcome came down to the final hole in the final match, and when Dave Lydell of Team OGA could not get out of a greenside bunker on the 18th hole of his match against Scott Vermeer of Team IGA, the title of the PNGA Cup went to BC Golf, which won by half a point over Team OGA, two and a half points over Team WSGA, and seven points over Team IGA.

The Ryder Cup-style format included four-ball and foursome matches the first day and singles matches on the second and final day. The PNGA Cup is one of 15 major, regional, amateur championships for men, women, juniors, and seniors conducted annually by the PNGA throughout the Northwest.