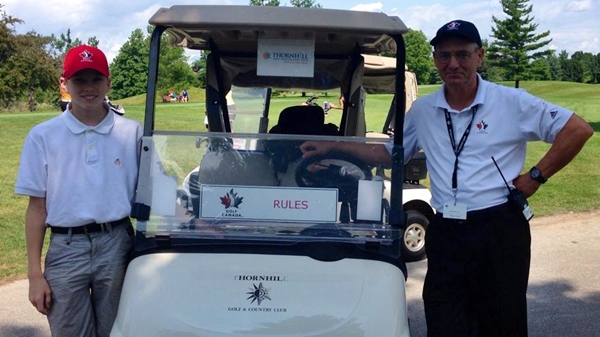 People often ask me how I got involved with the rules of golf. I was first hired by Golf Canada to help conduct amateur championships across Canada. My role has expanded a fair bit since then and I am heavily immersed in the rules of golf these days.

When I first started running golf championships, I quickly learned that a very important aspect of any competition is course set-up: establishing course yardage; defining margins of hazards and out of bounds; and selecting hole locations. In order to properly set up a course for a national championship, a thorough understanding of the rules is a necessity.

I have to admit, it was really tough in the beginning to learn the rules as they are written in a very precise and deliberate way. If I misinterpret one word or forget if whether the rule states “should,” “may,” or “must,” there is no chance of getting the right ruling. It takes countless hours studying the rules and years to fully understand all the nuances of the rules of golf. At every seminar and tournament I attend, I still learn something new. That’s what keeps the game interesting and ultimately why a lot of people become rather obsessive over the rules.

I’m fortunate that my position allows me to work many tournaments around the world and meet some amazing people. I was fortunate to catch up with two of our rules officials and talk to them about their interest in the rules of golf and how they got started. Hope you enjoy getting to know them a little better in my scrawl below.

Canadian Golf Hall of Fame member Alison Murdoch has recently taken an interest in the rules of golf. She initially completed Golf Canada’s Level 2 online program to feel more confident about the rules on the course. The rest is history.

After completing the necessary practical hours for her Level 2 certification, Murdoch attended the Level 3 seminar with British Columbia Golf’s Susan White at Duncan Meadows Golf Club in 2008. She was feeling confident enough to write the exam, passed and decided to do the practical hours to get certified at Level 3. A few years later, she attended a Level 4 seminar. I had the pleasure of working with Alison at the 2011 Canadian Women’s Amateur and immediately noticed that her competitive playing experience helps her deal with players on the course.

“When I’m on the course, I now feel more confident about the regular day-to-day rulings in terms of myself and helping out fellow competitors,” said Murdochwhen describing how the rules have helped her as a player. “I also know that if it is at all complicated we should get a rules official in and get guidance. Then everyone will be sure that we did the right thing.”

Murdoch is retired now but says her career has helped in many situations on the course. “When I was working, I used to do investigations into complaints in the Human Resources field. I am familiar with getting the information required to make a decision and with the problem that you may not be able to get all the evidence you might want or you might not have total confidence in some of the evidence.”

A few years ago, an 11-year-old wrote the Level 2 rules exam and achieved a perfect score. The son of accomplished Canadian player Tim Yorke, Timmy grew up playing and watching his dad on the course. The Yorke family resides in Kensington, PEI, and are members at both Green Gables Golf Club and Andersons Creek Golf Club.

While volunteering at a Prince Edward Island Golf Association (PEIGA) championship, Timmy became interested in the rules of the game. He was stationed on a hole as a forecaddie, spotting balls near a water hazard in the landing zone of a hole. There were a few balls that managed to find the hazard and Timmy, not knowing the rules at that time, was curious about how the players should proceed. “My interest in the rules was also heightened every time my dad would come home from a tournament and ex- plain to me all the rules incidents,” said Yorke about his early introduction to the rules. of golf “A few times my dad was on the wrong end of a ruling and it made me curious about why he was penalized in those circumstances.”

Soon after completing the online  Level 2 program, Timmy started working towards his Level 3 certification. Last winter, he contacted the Golf Association of Ontario in hopes of participating in its online prep course for the Level 3 seminar. While most kids his age were spending their time doing school work or playing sports, Timmy was on a webinar with rules officials learning the rules of golf.

Timmy admits that he doesn’t play as much golf as he’d like, but he claims that he’s definitely more interested in the game now that he’s got a better understanding of the rules. Now 13, he is the youngest person in Canada to achieve the highest rating on the Level 3 exam and has a bright future ahead of him if he wants to pursue officiating roles in the future.

To learn more about the rules of golf, click here.

This blog was originally published in Golf Canada magazine.