Ben Crane continues to lead St. Jude after 2nd round 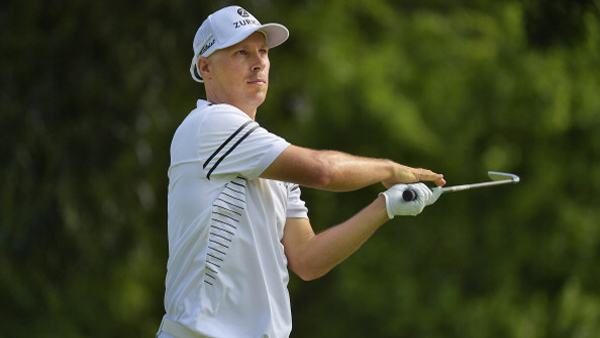 MEMPHIS, Tenn. – Ben Crane remained atop the leaderboard with his 5-under 65 good enough for a four-stroke lead once the weather-delayed second round finally ended Saturday at the St. Jude Classic.

Crane finished his first 36 holes Friday with a 12-under 128 total before a delay for lightning, then thunderstorms washed out play and closed the TPC Southwind course. Fog delayed the start of play Saturday morning for an hour, and the drenched course made for softer, more receptive greens though also stopping shots from rolling in the fairways.

Phil Mickelson shot a 68 after a bogey-birdie-bogey-birdie start. He was in a group of eight at 135 including Davis Love III (70), Billy Horschel (68) and Dustin Johnson (67).

The third round was set to start at 3 p.m. with players going off both tees trying to squeeze in as much golf as possible with more thunderstorms possible.

A delay Thursday forced 60 players to wrap up their first round Friday morning with only 32 finishing the second before a delay for lightning with 13 minutes of play squeezed in followed by the next delay for a thunderstorm. Fans were sent home for a second straight day, and players never went back out again with water standing in fairways, bunkers and cart paths.

Crane’s 36-hole total tied for the second best of his career and the 12 under matched Harris English’s winning score here a year ago. That left him a target that nobody could reach during the second round.

Villegas said he wasn’t thinking about Crane at all. He went out with a six-birdie round, finishing birdie-birdie on Nos. 17 and 18.

“There’s still half of the tournament to be played, and you got to focus on your game,” Villegas said.

Mickelson hasn’t won in 19 events dating back to the British Open, and he’s just one of the many in Tennessee trying to tune up for the U.S. Open at Pinehurst next week. He tied for 49th last week in the Memorial following a visit from FBI agents and lingering questions about an insider-trading investigation. He never teed off at all Friday with the horn blowing for the second time with him at the No. 1 tee.

He said he couldn’t hit his irons close enough or his putts. He birdied Nos. 14 and 15 to get to 5 under but had to roll in a 16-footer to save par on the par-5 16th. He wasn’t happy at missing a birdie opportunity with the pin at the front of the green.

Pettersson was upset he couldn’t finish Friday, forcing him to set his alarm for 4:45 a.m. in order to finish his second round with a two-putt from 46 feet.

“It wasn’t too bad,” Pettersson said. “I just had to putt. I hit 30 minutes of putts on the putting green.”

Only 32 finished up the second round Friday, and Goosen was among the many playing a full 18 Saturday. He had an up and down round with seven birdies and three bogeys to pull within four strokes of Crane. He planned to go rest until his next tee time.

“Tricky some of these greens, this morning or afternoon,” Goosen said. “I don’t even know what the time is. It’s been a long day already. Overall very happy with the round yeah. I could have probably would have been nice to make another birdie coming in on the last three. I had my chances but (can) shoot pretty low again this afternoon to catch Ben.”

Divots: Local favorite John Daly was among 71 making the cut at even par. Defending champ Harris English missed the cut along with Patrick Reed, Lee Westwood and David Toms, a two-time champ here. … David Duval withdrew after seven holes in his second round. He was at 7 over for the tournament.