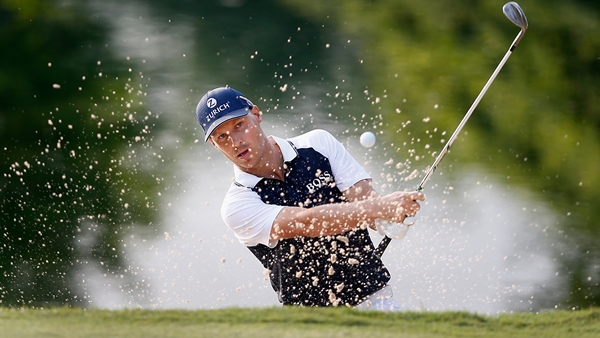 MEMPHIS, Tenn. – Phil Mickelson came to the St. Jude Classic wanting to tune up for the U.S. Open at Pinehurst by finishing strong.

He did just that Thursday.

Mickelson shot a 3-under 67, birdieing three of his final four holes in windy conditions before a thunderstorm softened up TPC Southwind. It was his first round in the 60s since the third round at the Wells Fargo Championship. He hadn’t shot below 70 since. He missed the cut at The Players Championship and tied for 49th last week in the Memorial following a visit from FBI agents and lingering questions about an insider-trading investigation. Lefty hasn’t won in 19 events dating to the British Open and is among the players in Tennessee tuning up for Pinehurst.

“I did exactly what I need to do and build some momentum that I need heading into the U.S. Open,” Mickelson said. “Tomorrow’s round, the same thing. Finish strong and play a good round.”

Ben Crane shot a 7-under 63 giving him the lead in the suspended first round, taking advantage of the 3 1/2-hour delay that left nearly perfect scoring conditions with no wind and rain-softened greens. He had five of his seven birdies on his final nine, the last a few minutes before play was suspended because of darkness.

Sixty players were unable to finish the round.

Peter Malnati shot a 65, and Billy Horschel also was 5 under with two holes left to play. Retief Goosen and Joe Durant each had a 66, while Stuart Appleby, Zach Johnson and Jason Bohn were on the course at 4 under. Appleby had a hole-in-one on the 157-yard eighth hole, using a 7-iron. That was his 17th hole, and the last one he completed.

Crane needed only 24 putts for his best round of the season, including a 27-footer for birdie on his final hole at No. 9 with only a handful of people watching because officials closed the course to spectators because of the high winds with the storm.

“We caught a huge break being on this side of the wave,” Crane said. “You know this is ideal Memphis weather. It’s as good as it gets. It was calm, barely any wind. The greens softened up. We were able to attack some of the pins.”

Mickelelson, who tied for second at Southwind last year, was among the 53 players who finished before play was delayed. Even with tricky wind Thursday morning, Mickelson said his focus on each shot was much better. He’s trying to better visualize the shot and curve his irons so that his approach shots land closer to the hole, giving him more tap-in opportunities.

Finishing with the three birdies in his final four holes was exactly what he wanted in a round with five birdies and two bogeys.

“I’ve been struggling with finishing the round strong,” Mickelson said. “I had a good round last week on Thursday and then played poorly. To birdie three of the last four made it a great round. That’s exactly what I need to do.”

Firm greens made it tough to land balls close, but Goosen credited them with helping him roll in some of his birdie putts. He sunk a couple from 5 feet or closer, but also had a couple birdie putts from 14 feet. Goosen also saved par on No. 7 with a 12-foot putt.

“The greens are as good as greens as you can get,” Goosen said. “The greens are rolling close to 13 on the stimpmeter. They are really good. You hit the right putt, they are going to go in.”

A seven-time winner on the PGA Tour, Goosen hasn’t won on tour since 2009. He has two top-10 finishes this year as he continues his comeback from back surgery in August 2012. He tied for third in Memphis in 2011 and said he really likes the course.

The three Canadians managed to complete their opening-rounds Thursday.

Robert Garrigus withdrew after hurting his wrist in the 18th fairway. He had a 79 that included three bogeys, a double and an 8 on the par-4 17th.