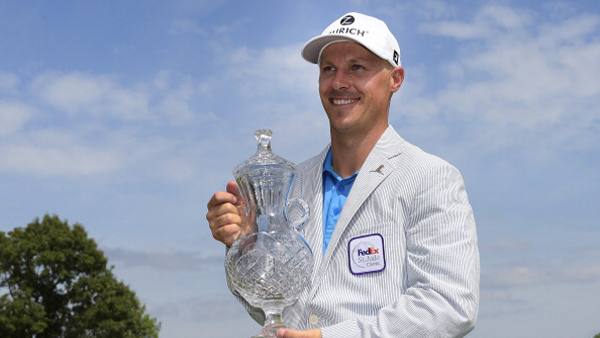 MEMPHIS, Tenn. – Ben Crane estimates he slept less than three hours in a night spent praying and thanking God that his game finally has come back around.

Then he played 30 holes Sunday in winning the St. Jude Classic for his first PGA Tour title since 2011, setting off a celebration that included hugging his caddie and high-fiving a reporter. Crane also choked back some tears as he looked at text messages filling his phone.

“Oh my gosh, it just keeps going,” Crane said, looking at his phone. “How many can a phone hold? This is so much fun”

Crane closed with a 3-over 73 for a one-stroke victory, going wire to wire for his fifth career victory. Rain delays forced him into the marathon session Sunday at TPC Southwind, finishing 12 holes in the morning in a third-round 69 to take a three-shot lead into the final round.

He two-putted for bogey on the final hole to finish at 10-under 270, days after failing to qualify for the U.S. Open. That marked a low point for the 38-year-old player who spent the past six months reworking his swing to protect his back wondering if his career was over. He spent time with a coach picturing the right way to hit shots.

Everything clicked Thursday with an opening 63.

“I did not expect the hole to open up like that and just start making putts from everywhere,” Crane said. “Just hit a lot of quality shots and obviously built a nice lead to start out with.”

Merritt credited the best finish of his career to an improved short game.

“Ben played great,” Merritt said. “Hats off to him. Well deserved. He’s been struggling for a little while. Very happy for Ben.”

Phil Mickelson, among those tuning up for the U.S. Open at Pinehurst, left winless in his 20th event since the British Open. He tied for 11th at 6 under after a 72.

Consecutive birdies on Nos. 11 and 12 put Mickelson at 8 under. But he bogeyed the next two, including the par-3 14th where he hit a 7-iron into the water in front of the green. He still finished much better than his tie for 49th at Memorial last week after an early visit from FBI agents and lingering questions about an insider-trading investigation.

“The way I drove the ball last two rounds I had an opportunity to shoot really low,” Mickelson said. “My iron play was poor, and my putting was pathetic. I’ll have to make some changes and to get ready for next week. But the game is not far off because I’m driving the ball very well and putting it in play.”

Wind, thunderstorms, lightning and fog have delayed play each of the first three days. With more storms forecast, players started the final round almost immediately after concluding the third. They finished without single delay Sunday as the sun even came out as this tournament finished its 57th year without being shortened because of weather.

Crane had three bogeys in the final round, one more than he had through 54 holes. He became the first winner on tour without a birdie in his final round since Justin Leonard did it at Southwind in 2005.

He cruised along before two-putting for bogey on No. 6, dropping his lead to two strokes over Brian Harman and Merritt. Crane bogeyed No. 9 after hitting his tee shot into the rough. He couldn’t clear the rough with his next shot, and his third bounced to the rough behind the green.

Crane said he only glanced at the leaderboard a couple times.

“I just knew I was leading, and I knew Phil Mickelson was out there so,” Crane said. “And Phil’s a good friend, and he kind of gave me that, `I’m coming after you.'”

Merritt was the closest, within a stroke for six holes before putting his tee shot on the par-4 15th into the rough. He couldn’t roll the ball in from 15 feet to save par.

Crane strung together eight straight pars before going to the par-4 No. 18 with a two-stroke lead needing to avoid the water down the left side of the fairway. He did, though he did find the greenside bunker. Crane two-putted from 12 feet for the win. He earned $1,044,000.

Divots: Crane is the eighth player in this event’s history to win after having at least a share of the lead after every round. Lee Westwood was the last in 2010. … Crane also won the 2010 CIMB Classic before it became an official tour event.